It was quite a diverse guest list that graced The Pipeline Show on Saturday. We had a former NHL head coach turned ESPN analyst, a junior goaltender looking to make Memorial Cup history, the head scout of a National program, the voice of a legitimate WHL contender not getting the media respect they deserve and our weekly visit from our NHL Insider. 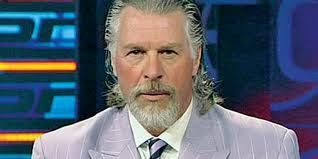 The Frozen Four begins in mere days and a National Champion will be crowned less than a week from now. To help set the scene we welcomed ESPN colour analyst Barry Melrose to the program for the first time. The former head coach of the L.A. Kings and Tampa Bay Lightning gave us his rundown of the 4 teams, the players to watch for, offered up his prediction for the Hobey Baker and told us why North Dakota is the team to beat. 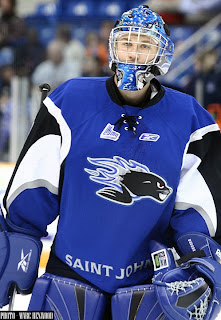 In segment #2 we went to Saint John for a discussion with netminder Jacob De Serres. De Serres was in net last May for the Brandon Wheat Kings as they hosted the Memorial Cup and now, as a member of the Sea Dogs, he has a chance at carving out a place in history for himself. As far as we know, De Serres could be the first player to play in back-to-back Memorial Cup tournaments for two different teams from two different conferences. We talked about that, got a goalie's perspective on Ryan Nugent-Hopkins vs Sean Couturier vs Jonathan Huberdeau, learned what role Brandon GM Kelly McCrimmon played in De Serres ending up in New Brunswick and the goalie also spoke candidly about his status as a prospect. Highly recommended listening here. (photo: Mark Henwood)

(For another compelling story out of Brandon this week, check out this write up posted at the WHL website, penned by Randy Turner of the Winnipeg Free Press).

In our third segment, Dean and I went over the CHL playoffs in all three leagues and also discussed some of the stories behind the headlines. Has Ryan Nugent-Hopkins done enough to establish himself as the top forward in the draft and potentially the #1 overall pick? Was it just bad timing for the Oilers to sign goalie Olivier Roy on the day of Game 4 where he watched from the bench? Why have all the Saskatoon Blades been told to close their Facebook accounts? Which 2011 eligible prospect from the upcoming Niagara/Oshawa series will step up the most? Plus more.

At the top of the second hour we heard from Kevin Prendergast, head scout for Hockey Canada, as he updated us on the construction of the U18 roster. He told us how many players have already made the team, hinted at their being a number of under-age players heading to Germany and gave us his scouting report on Swede Adam Larsson.

Daren Millard stopped by for his weekly segment. This time we tossed around names of NHL rookies who are expected to make an impact in the postseason. We took that conversation and redirected it towards the World Hockey Championship. Should Canada consider a former Red Deer Rebels combo of James Reimer and Cam Ward (if available) or has Devan Dubnyk earned consideration? Has Braden Holtby played his way into the conversation in Washington as the Capitals get set for the playoffs?

Finally, we went to Spokane and talked to Mike Boyle, the play-by-play voice of the Chiefs. Outside of the league, Spokane gets overlooked quite a bit but Boyle told us why this year's team reminds him of the 2008 Memorial Cup champs and also how they are different. We also discussed the current series with Chilliwack and how the cloud of relocation is hovering over the Bruins.

If you missed a segment or two earlier today have no fear, you can click the archive and hear the entire show. Find the media archive HERE.
Posted by Guy Flaming @ 8:00 PM