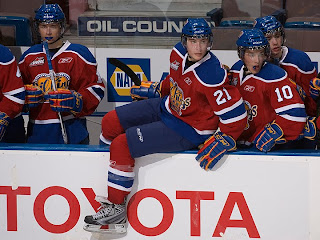 The Edmonton Oil Kings were bounced from the playoffs last week, but for atleast one player the season will continue. TPS has learned that guest blogger Travis Ewanyk has been selected to play in the U18 World Championship starting April 14th in Germany.


Last Saturday head scout Kevin Prendergast told TPS that Ewanyk was on their radar and the hard working 2 way gritty forward made enough of an impression that he'll wear Red and White for the 2nd time in his career after suiting up for Team Pacific in the U17's in 2009.

Ewanyk scored 16 goals and racked up 126 PIM this season. He was given the task of trying to shut down Ryan Nugent-Hopkin in the post season, and when Edmonton had last change in games 3 and 4, Ewaynk went back in time by shadowing the top prospect. RNH did put up a goal and 3 helpers in the two final games, but the goal went in off his leg, and 2 of his assists were on the power play, so all in all a pretty good job by the St. Albert product and likely future captain of the Oil Kings.

We've talked to many a scout who is hoping Ewanyk is still around in the 3rd round, but with a strong showing in Germany they might be changing their expectations to round 2.