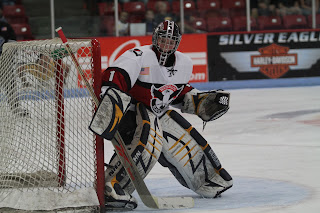 The Pipeline Show is excited to be able to bring you some bonus content from our new friends at PuckLife. From time to time, we'll be posting player profiles written by some of PuckLife's scribes but that still fit the format of what we do here at Coming Down the Pipe and on the air with TPS.

Today's player profile is on a goalie out of the USHL that is eligible for the 2011 NHL Draft. Introducing you to Jay Williams is writer Brittany Burke...

Nine years ago the Washington Capitals were defending Southeast Division champions, the team logo was a bronze Bald Eagle with five stars, and Alexander Ovechkin wasn't a household name; but for one eight-year old from McLean, Virginia, the Caps managed to change his life.

“My best friend at the time, for his eighth birthday, we went to a Washington Capitals game and the next day all I could think about was how bad I wanted to play hockey so I guess I loved it the first time I saw it and I never looked back,” explains Jay Williams, a now 17-year old goalie for the USHL's Waterloo Black Hawks. After eight months of skating lessons to prove his love of the game wasn’t a phase, followed by a stint in roller hockey, he hit the ice with his first hockey team.

Williams chose one of the toughest positions in the game, but there's no doubt he made right choice. Since starting nine years ago he has been able to hone his talents, thrive off the demands of being a goalie and make his name internationally known between the pipes, all before his 18th birthday. “I just love the pressure and I love how you have to be your best every game. I feel like as a goalie, no matter who you’re playing, you have an impact on the game because you’re out there the full 60 minutes and I mean you have to be playing well and I love that.”

Playing for Hotchkiss Prep in Connecticut, Williams was selected third overall in the 2009 USHL futures draft by the Waterloo Black Hawks. He has committed to the University of Miami-Ohio, where he’ll continue to work on his game before ultimately trying to make it in the NHL, following in the footsteps of idols Ryan Miller and Marty Brodeur. Williams is expected to be one of the first goalies selected in the 2011 NHL Entry Draft.

“It wasn’t really until the end probably, leading up to the draft that I started to really talk to any USHL teams, and you know it was just all of a sudden all these dreams you had just came to be real, and it’s a reality now and it was one of the most exciting and honorable and humbling experiences of my career so far,” Williams explains.

Hockey has taken Williams from Virginia, to Connecticut, across the pond and now to Iowa to play for the Black Hawks before landing in Ohio. Not too bad for a kid who chose to play goalie because he thought the pads looked cool. - Brittany Burke

For more in-depth features on the NHL’s biggest superstars and the next generation of NHL stars at the minor, junior and college level, subscribe to PuckLife today!