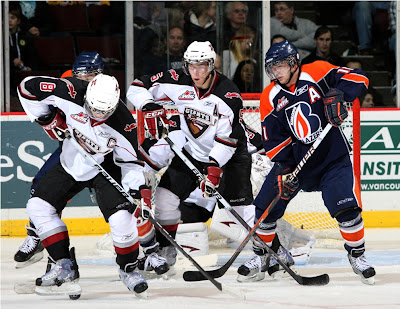 Continuing with Chapter 5 of his guest blogging series with us is Dylan Willick, forward of the Kamloops Blazers. The native of Prince George, B.C. submitted his first entry to the blog back on November 1st with Part 2 arriving at the end of November. Part 3 came early in 2011. On February we were treated to the 4th installment.

Since then, Willick's career year has seen him continue to produce points and further cement his reputation as a character/ leader for the Blazers. With the 2011 NHL Draft now just 3 months away, I know that teams are taking note of what the previously un-ranked (by NHL Central Scouting) forward has to offer. 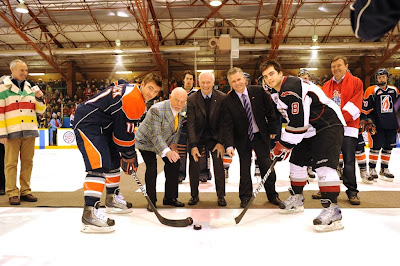 Four games left until the end of the regular season... how did that happen? The thought of being done in less than two weeks is a scary and unpleasant scenario.

The last time I blogged, the Western Conference was in a tight race to for playoffs. Not only for the teams trying to make the playoffs, but also for the teams working for home ice advantage. As expected, the conference race is still tight. Four teams have locked in their playoff berths, and only one team from the BC division is amongst them. Unfortunately for my team, we are not guaranteed a first round playoff spot and at this time, we are on the outside looking in. We are tied for 8th place with the Prince George Cougars, but they have one game in hand on us. Our season is down to just 4 games, all of them against division rivals. And considering our record of 10-18-1-0 record vs. the BC division, we’re in for a battle. I can't stress enough how important these games are not only for the season, but also for what may be our first round opponent in the playoffs. We need to make sure they know that they will be in for a battle all series long and that this team doesn't give up. 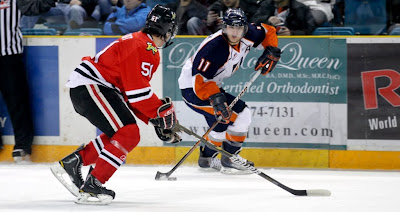 This weekend we play the Kelowna Rockets, who are the top team in our division, for the second year in a row. Our final weekend of game action, we play a home and home series with the Cougars. With the way the standings are looking, these remaining two games will most likely decide our playoff fate. The winner goes to playoffs, the losers go home. Not that I'm trying to look too far forward, but that will be one exciting weekend of hockey where I expect both teams to be leaving everything on the ice. The last 6 months of our time will come down to two 60 minute games. I am fortunate to be playing in my hometown for the final regular game of the season.

Now that you know the situation my team is in, let’s review how we got here... Our team continued its up and down play. We never really climbed up in the standings but at the same time kept ourselves from falling into the basement. Halfway through February we changed that pattern for the better. We started off by defeating the Tri-City Americans 3-2 in a shootout at home. This let us leave for our 10 day Alberta road trip on a high note.

Extra time was needed in the next four games we played. We battled hard to defeat Edmonton to start the road trip exactly how we needed to. We came up short in Red Deer, losing to them in overtime. Since we had a couple days before our next game in Lethbridge, we took a day to visit the ranch our owner Shane Doan grew up on. At the ranch we did a little team bonding, played some high quality floor hockey, enjoyed the rock climbing wall and a little bit of tobogganing just to top it all off. It was a great experience that had all the guys feeling pretty good going into Lethbridge where another hard fought battle led us to overtime and another two points for the Blazers. 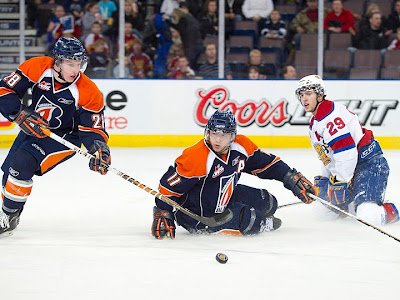 Medicine Hat is well known for being a tough rink to play in; we found that out the hard way and almost too late. With just ten minutes left on the clock, we found ourselves down 5-1 and the hometown crowd was roaring at us to bring on the bus... But like I said earlier, this team doesn't give up. Colin Smith scored two beautiful, on the rush goals in the next 5 minutes to complete a hat-trick. Then with just over two minutes left on the clock, the Tigers found themselves down 2 men, thanks to a delay of game penalty for shooting the puck over the glass. With 55 seconds left on the clock, I managed to pot a bouncing puck in the net off the rush and the next shift, put home a rebound to complete the comeback with just 20 seconds to play. The overtime was just as exciting. Leading scorer Linden Vey got himself a breakaway but hit the post. Then in the last 10 seconds of the OT, our leading scorer Brendan Ranford got a breakaway and was stopped cold. True to form, the shootout was an exciting ending with Smith scoring the winning goal followed by Jeff Bosh making the final save.

The streak continued into Cranbrook where we decided we didn't need overtime anymore and finished the road trip winning the game 8-5. That's a road trip I will never forget thanks not only to the results, but also because of how we won those games. The Medicine Hat game was definitely the highlight game of my career so far...

Since the road trip, we have lost all 4 games, 3 of them at home, with the most recent against the Tri-City Americans. They beat us with a goal scored in the last minute of the 3rd. Tough times for our team and not much time to turn it around with another great comeback. 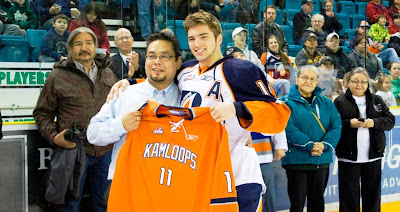 One exciting part about the first game back home against the Rockets was that it was Aboriginal night at Interior Savings Centre. The organization honoured the tribes that live in the area. For charity purposes, the Stanley Cup was also in attendance. Funds were being raised to help a local family, whose son is battling a rare form of cancer. Being of Aboriginal heritage, I was proud to present my Blazer 3rd jersey to the Chief of the Tk'emelup’s Indian band. It was my first time meeting the Chief and quite the honour for me. The next day, some of the other Blazers and I went to the Aboriginal school to talk to the kids and play a game of floor hockey.

On an individual note February was my most productive month. I scored 6 times and added 6 assists in the 15 games played that month. On March 7th I scored my 24th goal of the year. That puts me just one shy of my goal for the season with 4 games remaining. I hope to reach the 50 point club this year and find myself just 6 points away from that goal.

Well, it's been a fun season blogging for you guys and letting you know how my team and I have been doing. I hope to continue keeping you posted on my team's playoff success as well. Take care for now and thanks for reading!