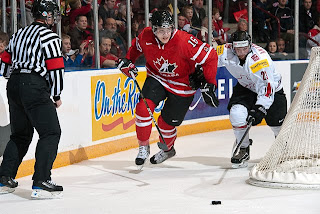 The Oilers announced today they have signed 2010 second round pick Curtis Hamilton to an entry level deal. While Hamilton put up great numbers during the regular season with 82 points in 62 games with Saskatoon the post season he was Jekyll and Hyde. In the first round against Prince Albert, the 6.03 206 pounder put up 10 points in 6 games but was neutralized by Kootenay in round 2 with just a single assist in the fourth and final game.

Hamilton was also a member of Canada's World Junior team. Next year he would be an over-aged player in the WHL meaning he is eligible to play in the AHL with the Oilers farm club in Oklahoma City.


So far the club has signed 2 of it's 3 second round picks from 2010 having inked power forward Tyler Pitlick to a deal last week, Pitlick played this year in Medicine Hat but hasn't played since March 3rd due to a broken ankle. Pitlick was drafted after playing in the NCAA last season, meaning he is also eligible to play in the AHL next season.

So that leaves only Slovakian d-man Martin Marincin unsigned from their 2nd round action last year. Marincin suited up with Prince George this season and was a force for the first half. He hit a wall as the year wore on. Marincin roared out of the gate with 30 points in his first 26 games, but put up just 26 in the last 41. Marincin can also play with Oklahoma City as he was drafted out of of Slovakia, but he probably needs another year of junior. Although a lot can happen over the summer.
Posted by Dean Millard @ 3:51 PM