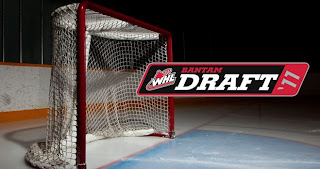 Last week we took a look at some of the top blueliners that are on scouts lists for the May 5th WHL Bantam Draft. This time around we'll go with forwards.

A lot of people believe that the first overall pick isn't a slam dunk like last year with Alex Forsberg going to Prince George, but others will tell you they have a definitive first overall player. Keep in mind scouts see players with different view points, they're not robots so while one isn't a fan of a certain a player there are other(s) who are really high on him. And just because a player isn't on a top ten list or even drafted in the top ten doesn't mean they aren't a future star (see Max Reinhart, drafted 15th overall last year, the hottest prospect in the WHL right now).

So here it is, ten forwards of all shapes, sizes and skill sets to watch for at next week's Bantam draft and at some point next season in a WHL arena.


10. Tanner MacMaster- Calgary Bisons 5’8 135lbs
One of the top scorers in the AMBHL, Tanner has a skill set that should translate very nicely at the WHL level. A major injury at the AB Cup left many scouts scratching their heads. "...His size is still a big question as is his durability."

9. Adam Brooks- Winnpeg Hawks 5’10” 153 lbs
Adam has been Manitoba’s top forward all season long. His recent performance at the Western Canadian Bantam Championship should keep Adam in the first round.

8. Miles Warkentine- Prince Albert Pirates 6’0“175 lbs
"....The best true power forward in this year’s draft." Miles combines a very gritty game with a knack for the net, one of the toughest kids to play against all year long.

7. Kolten Olynek- Saskatoon Outlaws 5’7” 150lbs
Kolten may be a little undersized but his speed and skill more than make up for it. "....The fastest player in this year’s draft class." 75 goals in 46 games speaks well of his touch around the net.

5. Dakota Odgers- Melville Millionaires 5’11” 184 lbs
The riskiest pick in this year’s draft may also be the safest. Dakota missed most of the year with a shoulder injury but was a preseason top 10 pick. "...His skill and work ethic is unmatched." Son of former NHL tough guy Jeff Odgers.

4. Reid Duke- Calgary Royals 5’ 10” 170 lbs
The best individually skilled forward that will hear his name called on May 5th. "...this kid has the ability to 'wow' you on a regular basis." 64 points in 30 games makes him one of the best offensive players in this draft.

3. Reid Gardiner- Humboldt Broncos 5’11” 172 lbs
A strong two way player that some feel is could step in and play in the WHL right now. A work horse that loves to compete "…a true leader, he could be a captain in the WHL by the time he's 18"

2. Ty Mappin- Red Deer White 5’11” 168 lbs
Ty capped off a sensational bantam campaign with an outstanding performance at the Alberta Cup. "...this guys is the best forward in the entire province of Alberta no question" Ty’s versatile play also allows him to play defence when called upon, thus making him one of the top defenceman in this year’s draft as well!

1. Jake Virtanen – Abbotsford 6’ 172lbs
The premier forward in this draft class. "....He dominates with size, skill and speed like no one else, you build around a true franchise player like him". He could be the first BC raised player since Ryan Nugent-Hopkins to be selected first overall.


“Knocking On The Door”

You guys need to get more and better information when talking about Manitoba born players. Brooks was MVP for the WCBC this year and also was the leading scorer in his league and at the WCBC. In my opinion you guys might just be better at posting the names that you see out west rather then the players from central Canada as it appears you are not doing your homework. Good blog...just get more info is all I ask.

How do you sign up your kid the draft ?
US player Seattle Jr Thunderbirds Tier II AA player..
1997 born (march) currently 6'1" 195lbs, one more year at Bantam?

please email me if you know /.

not sure how we can email you, don't have your address???