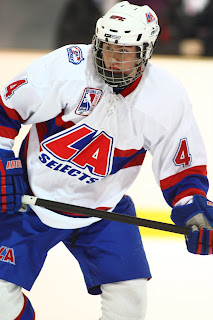 The Pipeline Show is excited to be able to bring you some bonus content from our new friends at PuckLife. From time to time, we'll be posting player profiles written by some of PuckLife's scribes but that still fit the format of what we do here at Coming Down the Pipe and on the air with TPS.

Today's player profile is on a player not eligible for the NHL Draft until 2013. Introducing you to Scott Savage is writer Bill Kellett...

It's pretty rare to find a young hockey player who exudes as much poise and confidence off the ice as he does on it. When talking to Scott Savage, it's hard to believe the kid is just 16 years old, a player whose two years away from even being considered for the NHL draft and has already committed to a full ride scholarship at one of the most prestigious colleges in the US.

Savage discovered hockey in an unconventional way, in an even more unconventional setting. Having been born in Lake Arrowhead, California, and moving to San Clemente at the age of four, he was introduced to the game by the family they purchased their house from. They took Savage to the local roller rink, and as they say, the rest is history.

At the age of 10, Savage began playing for the LA Selects, a program which he has practically grown up in, having spent the past five years in there. He has also grown in the system, both physically and mentally to the point where his skills are now undeniable.

When asked for a comparison to any current NHL Players, LA Selects head coach, Louis Pacella, had this to say, “I don’t like making comparisons of players, but if I had to pick one I'd have to say Jack Johnson,” a sentiment that Savage himself called “pretty accurate”. Oddly enough, it is Johnson's defence partner, Drew Doughty, who Savage considers his favourite player. 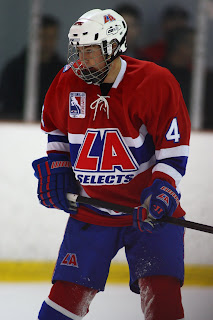 Already standing over six feet tall, Savage is widely considered to be one of the best defensive prospects in the US. One might assume it's NHL or bust for him, but that's just not the case. “The NHL would be great for sure, but if it doesn’t happen I’m fine with that,” explains Savage. “I’ll still come away with a degree from an amazing program.” That amazing program is Boston College, a place that Savage chose over many other quality institutions that had come calling. “I just love the city of Boston, and its got a fantastic program.” He's not entirely sure yet what to major in, but seems to be leaning towards obtaining a business degree if his hockey aspirations never come to fruition.

Rest assured though, Savage is putting in the work to give himself the best shot at realizing his hockey dream. From his own assessment, he needs to work on his skating and overall on-ice strength (which he has set a goal of putting on 10 pounds). The hard-nosed defenceman's vision and hockey sense are phenomenal and he will be looked upon to be one of the leaders of the Selects this season. “We want him to be a leader on our defence core and take it to the next level,” says Pacella.

For more in-depth features on the NHL’s biggest superstars and the next generation of NHL stars at the minor, junior and college level, subscribe to PuckLife today!
Posted by Guy Flaming @ 10:00 PM