The Tampa Bay Lightning joined the league back in 1992 and have had a roller coaster existence over their 18-year history. They've finished dead last in the standings, they've won the Stanley Cup, drafted 1st overall three times, played in front of over 28,000 people in an indoor game yet have had numerous off-ice problems as well.

There are a lot of critics when it comes to the idea of hockey in Florida and yet Tampa Bay appears to be one of the more viable locations of the Southern based franchises.

There are superstars on the Tampa roster including perennial all-stars like Vincent Lecavalier and Martin St. Louis. Strong draft position in recent years has allowed the team to add franchise players like Steven Stamkos and defenceman Victor Hedman to build a solid future around.

Here is a look at some of the other promising players coming down the pipe for the Tampa bay Lightning... 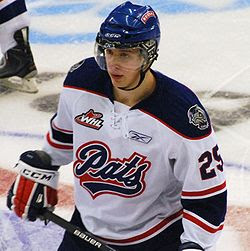 A second generation player, Carter Ashton is oozing with potential that is barely contained by his huge frame. The power forward originally hails from Saskatoon but he was a 1st round Bantam draft pick (7th overall) of the Lethbrdige Hurricanes in 2006 and that's where Tampa Bay found him. The Lighting chose him 29th overall just last June and believed they got a bit of a steal with him still being available at that time.

Ashton's 2009-10 has been fairly average but much of that can probably be attributed to the fact that he was playing on a very weak Hurricanes team until he was traded to the Regina Pats. With his new club, Ashton's production has actually fallen off even more which should be reason for concern. Still, the potential of the player is immense but so is the possibility that Ashton may be more of a longer term project than initially expected.

Originally a 1st round selection of the San Jose Sharks in 2006, Wishart is now in his second full professional season and is having somewhat of a breakout year in Norfolk. His 21 points makes him the AHL club's top offensive contributor from the blueline which is much more reminiscent of his WHL production that his 7 points in 2008-09 were. Wishart spent three and a half years in Prince George before being dealt to Moose Jaw at the 2008 WHL trade deadline. His years as a Cougar were remarkable and he was always considered one of the best players in his position in the league. With Victor Hedman already a NHL regular, we view Wishart as the top blueliner in Tampa's system ahead of his former Prince George teammate Vlad Mihalik and one time Bruin Matt Lashoff. 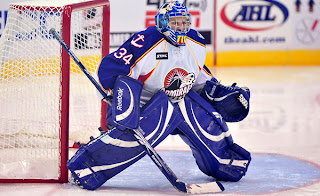 There haven't always been a lot of believers in Dustin Tokarski, in fact, it took half of us here at The Pipeline Show until his final year in the WHL to come around. I'm happy to say that I've always been a believer though but obviously Dean's not the only one who had questions; Tokarski was available for Tampa Bay to draft in the 5th round back in 2008. Hard to believe that now considering his unbelievable numbers in the WHL, his strong play at the 2009 World Junior Championship for Canada and the success he's had at the AHL level this year. 'Tick' was recently rewarded for his efforts with a recall which saw him appear in 2 NHL games in relief. Tokarski was guest on The Pipeline Show earlier this season and he talked about settling in to his role as a rookie on the AHL club. He's not big but he battles hard - probably a product of having to constantly prove himself at every level he's ever played. Tokarski has come a long way from the days his mom had to write a letter in order for him to get a try out, and the best is still to come. (Photo: AHL Images) 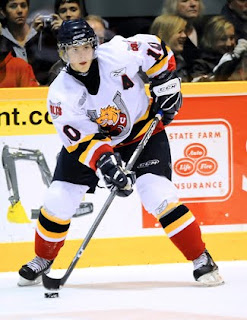 He's not big so it's tempting to suggest that at 5'10, Hutchings might not be a legitimate NHL prospect. That would be drastically underselling a pretty talented player though, one Barrie head coach Marty Williamson recently told us was an integral piece of their success this season. Hutchings was a 4th round selection by the Bolts in 2009 and the left winger has responded in fine form. After a 29-goal season came 34 last year and already Hutchings has 33 this season. The Ontario native in on pace to smash his career best for goals and will likely surpass his overall points mark as well. In the recent OHL all-star game the Colts forward struck for 3 goals and 2 assists. What he might lack in size he makes up for in heart, work ethic and speed which makes Hutchings a prospect to watch for. (Photo: Terry Wilson Photography)

After 48 NHL games this season the Tampa Bay Lightning decided to send the 19-year-old rookie back to the WHL. Wright had a hell of a training camp and exhibition season and basically forced Tampa to keep him to start the regular season. But when that magical 9-game line in the sand came up, I predicted that Wright would be set back to Vancouver because his production hadn't carried over from camp. I was wrong and the Bolts kept wright around. Finally they sent him back to the Giants with just 5 NHL points through 48 games and because they waited so long, that's 1 year off of his entry level deal that they've used up already. Poor asset management? It is to me. 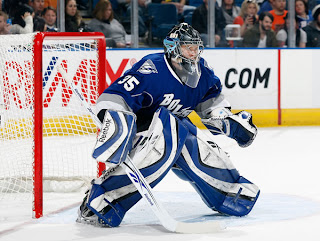 Also buzz worthy: Another former Prince George Cougar, Dana Tyrell, seems to be having a tough year in Norfolk. Through 43 games he has just 11 points, not nearly what I expected from the former 2nd round pick. I've always liked Tyrell but I have to wonder how much last year's knee injury is affecting him... How about Finnish goalie Riku Helenius being "assigned" to Södertälje of the Swedish Elite League? With Tokarski coming back down to Norfolk and Jaroslav Janus there as well, the former 1st rounder has been dispatched to Europe for playing time (Photo: NHL.com)...
Posted by Guy Flaming @ 6:00 AM