We all Make Mistakes (maybe) 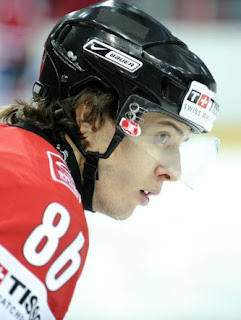 I've been watching the NHL draft seriously for several years now and for the last 8 or so I've been fortunate enough to have been in a position to have media access to help analyze the event every June. In doing so, each year I have my personal favorites from each draft class and I'm happy to say that many of those guys have made me feel like I'm not as dumb as I look.

I'm not going to beat my chest and say "Hey, Troy Brouwer was my guy in 2004 and now he's having a career year with Chicago". Nope, not going to say that. I'm also not going to mention Kris Russell, Claude Giroux or Mason Raymond because for every hit... I've probably got a miss or two.

Some of the guys I viewed as strong sleeper picks are still bubbling under the surface and could still pan out. Guys like Calgary goalie Matt Keetley, Tampa's Dana Tyrell and Dustin Tokarski, Atlanta's Spencer Machacek, Washington's Braden Holtby among them.

But there are guys that I expected much more from than they have so far been able to produce and one of those guys is an Olympian who will be in action tonight against Canada. 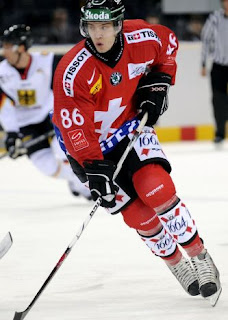 He's Swiss forward Julien Sprunger. I first saw Sprunger play at the Viking Cup in Camrose, AB during the 2003-04 season. There was another player on his team who was getting some scouting attention, Julian Walker, but for me Springer was much more impressive in that tournament. Oddly enough, the Minnesota Wild ended up drafting both players with Sprunger going in the 4th round followed by Walker in the 6th.

Sprunger was one of the bigger guys in the event, he could skate and played on Switzerland's top line. When it came to the physical part of the game, he was the opposite of the European stereotype; Sprunger seemed to get better if the game got rougher.

What escaped me at the time back then was the fact that he was bound to stand out because his club was older than some of the other Euro teams that were there. He dominated against the younger Czech team but really impressed me when he played the Americans and Finns which included eventual NHL guys like Tuukka Rask and Joe Pavelski.

I was sold and he became my sleeper pick of 2004 (along with Moose Jaw's Troy Brouwer).

Since then, Springer has stayed in Switzerland where he's actually put up decent numbers; he's been a point per game player for the last two seasons with Fribourg-Gotteron. This year he's on a similar pace with 26 points through 27 games.

Sprunger is 6'4 and just under 200 lbs, plays RW and unless I'm mistaken... is a free agent in regards to his NHL playing rights.

That said, if I'm a NHL GM looking outside the box for cheap free agent talent, I give Julien Sprunger some consideration. I don't know why it didn't work out with Minnesota but I wonder if given an opportunity, could Sprunger still carve out a NHL career?