The defending Memorial Cup champions are a favorite for this year's tournament and have already taken steps to ensure that they are in a similar position next season. Considering the Spits are the front runners to be chosen as the hosts of the 2011 Memorial Cup, the team has a historic three-peat of CHL domination on their mind.

The Spitfires could potentially lose a number of key players from their current roster or, like with the Brandon Wheat Kings this year, they could all return. If the squad remains intact, the new additions should make Windsor damn near unstoppable. 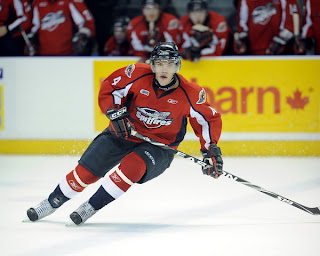 First, there's every reason to believe and expect that Taylor Hall will be in the NHL next year. The 1st (or 2nd) overall pick in the draft usually makes that transition and no one I've talked to envisions #4 back in a Spitfires uniform in 2010-11. (Photo: Aaron Bell/CHL Images)

What about Ryan Ellis, Greg Nemisz, Adam Henrique and Eric Wellwood? Is it unrealistic to think all of them might move on to pro hockey? Cam Fowler is the top-rated blueliner for the 2010 draft... might he be able to follow the footsteps of Drew Doughty, Zack Bogosian and Luke Schenn and go from a top-5 pick to the NHL?

Yes, it's possible all of those guys will be gone. It's also possible that all of them could be back. But if not, at least Windsor fans know that GM Warren Rychel has already taken steps to ensure his team will be at least a contender again next year. 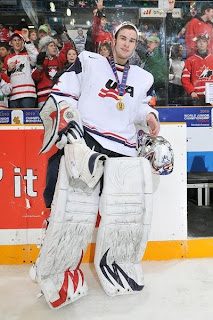 US-NTDP goalie Jack Campbell is considered by most to be the best goalie available for the 2010 NHL Draft and it's a pretty strong crop of netminders this time around. Campbell has already made it known that he'll join the Spitfires next year rather than follow through on his commitment to suit up with the Michigan Wolverines in the NCAA.

Campbell was impressive for USA at the 2010 World Junior Championship in Saskatoon during his starts and even more so after coming in off the bench in relief during the gold medal game. The Michigan native will be a huge addition to Windsor next year. (Photo: Jeff Vinnick/IIHF-HHOF Images)

It has also been announced that German sensation Tomas Kuehnhackl (spelled as Kühnhackl in Germany) has agreed to come to North America next year and will play for Windsor. Kuehnackl was chosen by Windsor 24th overall in the 2009 CHL Import Draft, a pick they'd acquired from the London Knights.

The CHL Import Draft has been long criticized for being less of a draft and more of an auction run by CHL GMs and player agents. rarely do you see the top European players being selected in order of actual value but instead they are usually available until it is the turn of the team that has already worked something out with the agent. Teams rarely take a chance on a big name Euro without having a pretty clear indication from the agent that his client will at least consider making the move to North America. That's one of the things we'll discuss with CHL Commisioner David Branch tonight on The Pipeline Show (9-11 PM eastern time, www.thepipelineshow.com)

Windsor GM Warren Rychel flew to German to woo Kuehnhackl and according to Jim Parker in today's Windsor Star, he was successful. 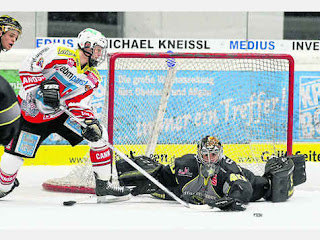 Two years ago Kuehnhackl was described to us by Canadian born WJAC assistant coach Jeff Tomlinson as the best German prospect in recent memory. He's currently rated as the 10th best Euro prospect for 2010 by NHL Central Scouting but I expect that his stock will increase with this latest news. NHL teams like Europeans more if they know that they are willing to make the move across the Atlantic and clearly, Kuehnhackl is. Kuehnhackl has 18 points in 33 games this year playing for Landshut in the German 1nd Division. (Photo: Mehr Sport/Getty Images)

Rychel is also reportedly still trying to secure US-NTDP forward Austin Czarnik who has informed Michigan State that he won't be joining them next year as planned. he's a 5'7 offensive forward that has 22 points in 17 games with the NTDP during play in the USHL this season.

It's a case of the rich getting richer, or at least not any poorer. The Windsor Spitfires will again be a top team in 2010-11 even if they lose a number of players off of their current roster.
Posted by Guy Flaming @ 11:00 AM