They've never won a Stanley Cup, they've held the record for the worst single season in NHL history for the past 35 years and have won only one playoff series in the past 10 years. However, the Washington Capitals might be the most desirable place to be for an impending unrestricted free agent.

For most of the years since their inception in 1974-75, the Caps have been something akin to the free space on a bingo card. They've had notable players in the past but even the likes of Peter Bondra, Joe Juneau, Adam Oates, Dennis Maruk, Mike Gartner and Scott Stevens could never get the team to the top. Washington's best year came in 1997-98 at the Stanley Cup Finals but it ended in a 4-game sweep at the hands of the Detroit Red Wings.

And yet D.C. might be the place to be for the next several years. Alexander Ovechkin, arguably the best player on the planet, leads the way but has a stellar supporting cast that some are comparing to the Edmonton Oilers of the early 80's.

Better yet for Caps fans, there's even more talent on the way to Washington. Here's a look at what's Coming Down the Pipe for the Washington Capitals... 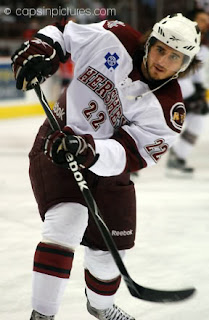 He was chosen in the 2nd round of the 2006 NHL Entry Draft at the end of a 102-point campaign with the Drakkar of Baie-Comeau. Bouchard played four full seasons with the team and totaled 319 points over his last three years with the club. That's some serious production from a player who never played for Canada at the World Junior Championship and got the chance to play in 26 playoff games over his entire junior career.

As a pro, Bouchard's biggest challenge is his foot speed but being only an average skater hasn't hampered his ability to produce offensively. The 21-year-old had 35 points as a AHL rookie last season and has already surpassed that with 39 so far after 53 games this year. He's currently 5th in team scoring with Hershey. (Photo: Capsinpictures.com) 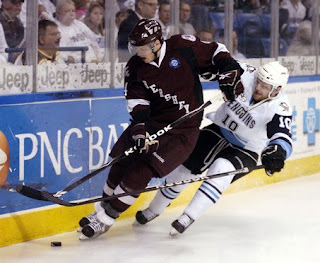 Karl Alzner could easily be listed here but I've elected to go with the hero of the 2010 World Junior Championship who scored the overtime winner to give USA their 2nd ever gold medal finish. John Carlson bounced from Indiana in the USHL to the London Knights of the OHL after being drafted in the late stages of the 1st round in 2008. Since that June it's become clear that the Caps did very well by grabbing the impressive blueliner when they did because most find it hard to believe he was still available at the 27th pick looking back just a couple of years. Carlson helped Hershey win the Calder Cup last year after scoring 76 points in London. This season he's picked up a pile of assists but it will be the no-look goal at the WJC that people will remember for a long time to come. (Photo: Mark Moran/The Citizen's Voice) 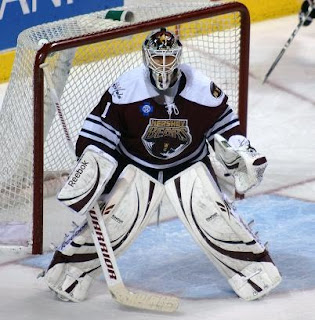 This choice might also be up for debate with some fans who might have expected to see Michal Neuvirth's name here. Personally, since his implosion at the 2007 Memorial Cup, I haven't been able to get behind the Czech goalie as much as some even considering his play in the AHL postseason last year. That said, I've long felt that Holtby was a steal for Washington in the 4th round of the 2008 Draft. The former Saskatoon Blade goalie was fantastic during his WHL days, even when his club was still coming together. Holtby is intelligent, articulate and mature which all comes through in his performance on the ice when he's needing to be mentally strong. The second generation goalie might have to bide his time to get a legitimate shot at the NHL because he's behind a couple other young goalies on the depth chart. However, in the end I still like Holtby over Neuvirth and maybe even more so than Semyon Varlamov. (Photo: Pro Hockey News) 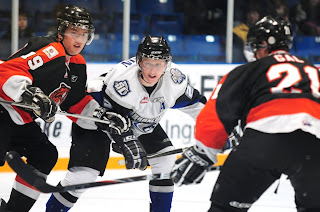 If not for an injury riddled season and lingering concussion worries during his draft year, Eakin would have been selected much higher than 85th overall in round 3. He placed second in the fastest skater competition at the 2009 CHL Top Prospects game and ended the year with 24 goals in 54 games. This year he's already scored 40 times, third in the WHL, and was given consideration to making Canada's squad at the World Junior Championship. Eakin has played in every game for Swift Current this year, aside from the two he missed at WJC camp, which has help lay to rest the concerns over his head injury. He's a bit undersized but has NHL speed and an ability to score - he's one to watch for. (Photo: WHL Images) 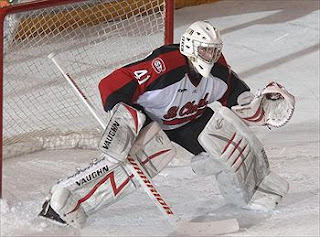 After two years of being the back up at St. Cloud, Dan Dunn is making the most of his opportunity with the Huskies this year. Incoming freshman Mike Lee came to the program with an impressive resumé and many though Dunn might be pushed to the background again but that hasn't happened. The two goalies have platooned at St. Cloud, sharing the weekend games and it's actually Dunn who has the better numbers next to his name. While Lee is only .500, Dunn has lost just twice in 16 games. The Capitals took a chance on Dunn with a 6th round pick in 2007, probably because of his size, and the Ontario native is making that bet look pretty good right now. (Photo: St. Cloud Athletics)
Posted by Guy Flaming @ 6:00 AM