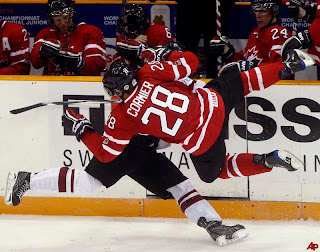 Thanks to Dean Millard and Guy Flaming for inviting me aboard as the new QMJHL correspondent.

Just checking in with a bit of news from the Q that got buried by Team Canada Olympic fever last night.

The Rouyn-Noranda Huskies announced they will be appealing the Patrice Cormier suspension to an independent arbitrator. As most of you probably know, the Atlanta Thrashers prospect was suspended for the rest of the season and the playoffs after elbowing Mikael Tam of Patrick Roy’s Quebec Remparts last month.

The independent arbitrator move is the second and absolute last resort of appeal for a QMJHL team. It would be a private appeal before an arbitrator selected by the league’s Board of Governors. QMJHL spokesman Karl Jahnke says he’s never seen it used in his six years with the league. The Huskies already took heat for appealing to the commissioner, so it will be interesting to see if they get any more negative reaction.

The team isn’t helping itself by maintaining a tight-lipped strategy with the media. General manager and coach Andre Tourigny isn’t taking calls, and Cormier himself has changed his phone number, so it’s tough to get their perspective. However, it’s also tough to blame them after they shipped three first-round picks, a second-rounder and two young players to the Rimouski Oceanic to get Cormier and Jordan Caron for a playoff run.

From a business standpoint, the Huskies probably just want to do all they can to get some return on that investment. So here are their options:
1. Phone Rimouski. Ask, “Pretty please can we have all our draft picks back?” Threaten to not be their friend.
2. Follow the appeal process available to them in the league constitution.

The Huskies want to win games, go deep in the playoffs, put fans in the Dave Keon Arena and, ultimately, make money. If you’re in the hockey business, don’t you choose Option 2, regardless of the public backlash? 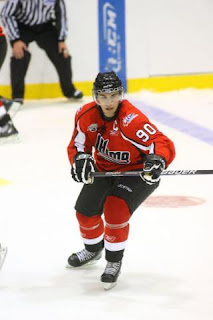 That doesn’t mean they condone Cormier’s hit. Neither do I, but I am in the minority that would actually like to see Cormier back this season.

My argument is his history/background/character, whatever you want to call it, doesn’t mark him as the kind of player who does this. I’ve talked to players and others around the league, and Cormier doesn’t really have a reputation as a “dirty” player. Certainly tough to play against, but not a guy that had people worried they’re going to lose their head (before this anyway) on any given shift.

And check out this bio, his favourite book is Of Mice and Men. The kid is French Canadian and reads John Steinbeck, how many junior hockey players can say that? (Random fact from that bio: Cormier's "favourite actress" is Mark Wahlberg). Seriously, though, in my time covering junior hockey, I’ve seen lots of kids who screw it up or waste their talent. Cormier has a reputation as a guy very focused on doing the right things to get to the next level, from fitness to nutrition to getting to bed instead of going out. His character is the reason he was selected captain of Team Canada at the world junior championship.

Don’t mistake this in any way for a defence of the hit itself, I just think Cormier’s personal qualities and history should factor in and give him a chance to play again this season.
Thanks again for bringing me aboard Dean and Guy. If you’d like to follow my writing, check out my blog or follow me on Twitter @nbwhite.

I was hoping we would start getting reports from Eastern Canada.

I notice Kirill Kabanov is back from surgery with 2 goals in 3 games. Wondering if you could share some information with us, such as:

How many minutes per game is he playing? I notice he is scoring PP goals - so would appreciate the TOI breakdown info ...

And, what training did he do during his time off? Did that add any weight to his frame?

Thank you in advance...