Because of their steady play, New Jersey hasn’t drafted higher than 17th since 1996. In that time only 9 players drafted by the Devils have played atleast 300 NHL games, which tells you either the unholy are to patient or aren’t the talent evaluating gurus some make them out to be. Zach Parise was gift wrapped to them by the Oilers, but they did select Scott Gomez, Travis Zajac, Paul Martin and Brian Gionta in the last 14 years. But the only stat that means anything is 3 Stanley Cup Championships since 1995. This year Jersey shipped out some young talent to bring in Ilya Kovalchuk, meaning the pecking order has changed.

Here now are some of the top prospects for the New Jersey Devils. 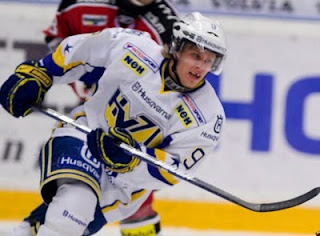 One of the best puck handlers and play makers in the 2008 draft, Tedenby also has speed to burn, which is pretty important when you’re undersized. But how small is he? Some sites have him at 5.09 168 and others use the numbers I have above. But don’t let the small package fool you, Tedenby can beat defenceman many different ways, from dangling to burning past them, to going right through them. He also possesses an above average shot that he’s used to score 9 times this year in the Swedish Elite League. I was actually surprised that the Swede was available at 24 in 2008, as this guy does everything at high speed. He’s been a point per game player in 2 World Junior Championship tournaments and should be a mainstay on the Swedish national team for years to come.

There isn’t a lot of offence from the blueline ‘COMING DOWN THE PIPE’ for the Devils, but rather some big, physical steady stay at home types. Matt Corrente isn’t the biggest, but he is one of the toughest. In a season and a half in the AHL, Corrente has dropped the gloves 18 times (according to hockeyfights.com) while in just 12 NHL games has scrapped 4 times. In his first full pro season Corrente racked up 161 penalty minutes, including 15 fighting majors. The Devils took him with the final pick of the first round in 2006, partly because of his toughness, but also because he makes smart safe plays with the puck. While he’s not expected to provide a lot of offence, he is halfway to his goal total from last year with 3, and his 16 points this season are only 2 back of his first year pro totals. 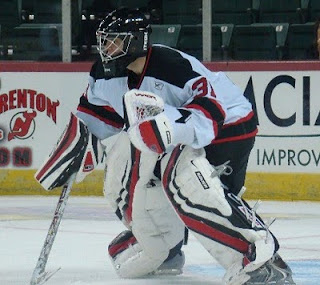 Jeff Frazee’s career thus far can be summed up in one word. Inconsistent. After 2 years with the U.S. national development team he joined the Minnesota Golden Gophers for 3 seasons. He won 6 of 12 starts his first year, 14 of 20 the second, but struggled to a 6-7 mark in his junior and final season. However in his first full pro campaign with Lowell, Frazee set a franchise record with 28 wins. This year he’s again come back to earth with a 12-13 record in 25 games. Long goals aside, see below, Frazee has the tools and time will tell if he’ll be able to put them to good use.

The Devils have only drafted 3 goalies in the last 9 years and with Martin Brodeur as your number one man it does make sense, but Brodeur is nearing the end of his reign and New Jersey will need Frazee, the only prospect pipeman in the system, to be ready.

The Devils took Henrique a lot earlier then most expected in 2008, grabbing him with the 82 pick in round 3, as apposed to some of the rankings that had him going 175th. What likely caught their attention was the fact that he scored 43 goals in his first 2 OHL seasons. Since then he’s put up 63 goals and counting. Henrique has 66 points in 47 games this year with the high powered Spitfires. Is he a product of playing with Taylor Hall and Greg Nemisz? Well he likely made the World Junior team on the strength of that line, but they didn’t end up playing together.

When the season began hockey fans in Brandon were anxious to see import Toni Rajala play. Not a lot of ink was given to Sweden’s Alex Urbom. That has changed now though. Urbom has been one of the most steady defenceman in the league with good point totals and a plus 39, behind only his teammate Colby Robak for the league lead. Urbom wasn’t considered a great skater in his draft year, but it’s improved quite a bit playing in Brandon. He’ll get a chance to play in the CHL’s championship – the Memorial Cup- this year as Brandon is hosting. He should have played at the World Junior championship but he was left off the original roster and planned a trip home. When contacted by team Sweden he wanted a guaranteed spot or he wasn’t going to play as he didn’t want to miss out on a trip home to watch from the stands.
Posted by Dean Millard @ 10:20 PM