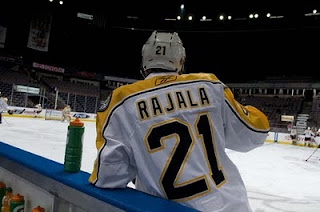 The Brandon Wheat Kings took the Regina Pats to the woodshed Friday night, in a 10-2 pounding that was filled with fights. 3 broke out in the final minute and a half. Oilers prospect Toni Rajala notched a hattrick and chipped in with 2 assists giving him 55 points in 50 games, and 16 multi point games this season. The win gives Brandon a 2 point cushion on Calgary and Saskatoon and improves the Memorial Cup hosts to 12-0-1 in their past 13.

The game might prove costly though as Wheat King Mark Stone needed help off the ice after a scrap with Regina's Colton Teubert. This from Luber's Lounge on the incident.

It was an ugly end to the game as Stone was goaded into fighting by Teubert, who followed the winger around the ice despite his team being on a 5-on-3 penalty-kill and was going to be assessed slashing and elbowing penalties before the fight happened.

"Very disappointed and just totally unnecessary and certainly wish that it hadn't have happened...it's just a fight we didn't need," said Brandon GM/Coach Kelly McCrimmon, "We were, I thought, doing the right thing. We had a 5-on-3 power-play late in a 10-2 game and we could have put our big boys out and jammed it down their throat and tried to make it 11-2 or 12-2 but we did what we thought was the right thing and the right way to play the game by putting out the guys that don't get that opportunity as much. I think what happened was very, very disappointing...I can't sugar-coat it, I can't say it any simpler than that, I thought it was really unnecessary."

Somehow, Teubert managed to escape an instigator penalty on the play and what would have been an automatic game misconduct.

The incident so irked the Wheat Kings that Brandon co-captain Brayden Schenn, a teammate of Teubert's on the Canadian Junior Team and a prospect with the same NHL organization (Los Angeles) came across the ice while Teubert was being escorted to the Regina dressing room to give the defenceman his opinion of what transpired.

Earlier this week Guy and I spoke with the voice of the Wheat Kings Bruce Luebke to find out what's going right for Brandon and you can hear that conversation here.

Was at the game Dean and it was a completely classless act by Teubert. Went after Stone from the drop of the puck slashing and cross checking him for 20 seconds until Stone finally had enough. The refs saw what was going on the whole time as they had their arms in the air for the penalties but continued to let it happen. Then a linesman stepped in and pushed Teubert away, but then he went right back to Stone. I hope the refs are happy with what transpired. Stone had to spend the night in hospital with a concussion and is out of the Wheaties lineup indefinately