Pysyk Out With Broken Foot 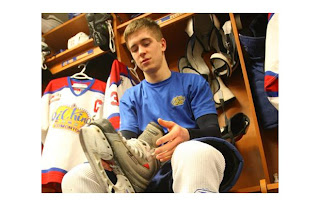 Edmonton Oil Kings defenceman, and projected first round pick for this June's draft Mark Pysyk has suffered a broken foot. Pysyk first injured his foot blocking a shot against the Prince Albert Raiders on January 31st. X-rays didn't show a break so Pysyk kept suiting up for Edmonton, but another xray on Friday revealed the break.

The 3rd overall bantam selection will miss the remainder of the Oil Kings season, which consists of 12 games after Saturday night. Doctors have told Pysyk he can swim to stay in shape as he hopes to be healthy enough to suit up for Canada at the U-18 World Championship in April.

Pysyk has 7 goals and 17 assists in 48 games this year. He was ranked 9th by ISS in January, and held the same spot according to Central Scouting in their mid term report for North American skaters.