The Kings have drafted inside the top 5 ten times in their 43 year history, and most of those picks have been pretty good, although not all the players went onto success with the Kings. They did however use one pick, Jimmy Carson (2nd overall in 1986) to bring Wayne Gretzky to LA….along with 15 million bucks. Lately LA has been stockpiling high end prospects, and here’s a look at some of them. 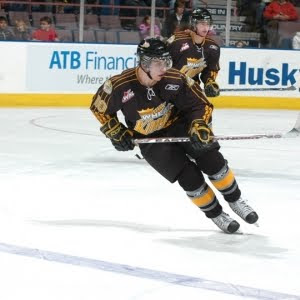 Taken 5th overall in 2009, Schenn has already played one NHL game, albeit on an emergency call up earlier this year. Schenn was taking part in the Subway Super Series when the Kings ran into injury problems while on a Western Canadian tour. Luckily game two of the Super Series was taking place in Victoria, so Schenn had a short trip across the water to join his team. An 88 point season with Brandon last year is what drew the Kings to Schenn, and he should surpass those totals this year, even with missing games to suit up for Canada at the World Juniors. Schenn has a great all around game with a nose for offence, and a knack for roughing it up, projecting him to be a terrific power forward in the NHL. He was taken in the same spot at the NHL draft as his older brother Luke when Toronto selected him a year earlier.

Some might be outraged by me putting Voynov ahead of 2007 fourth overall pick Thomas Hickey, but there’s something about Voynov that I really like. That’s not to say I’m not a Hickey fan but both have the edge on different categories on the other. Hickey is a better skater, while it’s my opinion that Voynov – taken in the 2nd round a year after Hickey – has more offensive upside. He’s already bested his first season in the AHL, and while he’s gone cold lately he should end up leading the Manchester Monarchs in scoring from the blueline. The two blueliners are roughly the same height, but the Russian rearguard has about 20 pounds on Hickey who underwent shoulder surgery in his first season as a pro and has yet to return as of this writing. Some who I’ve talked to have wondered if Hickey’s slight stature was a reason for his injury, and if he’ll be able to bulk up enough to compete at the NHL level. 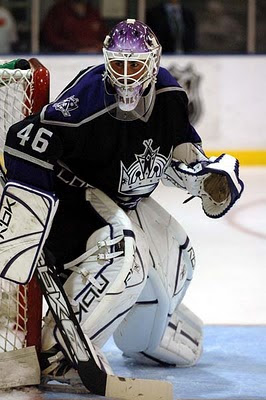 Bernier’s hockey journey has been a bit of a roller coaster, but he seems to be on the rise once again. After the Kings snagged him 11th overall in 2006 some thought he had a chance to crack the Kings roster 2 years later. He was sent back to Lewiston of the QMJHL where it was expected he would start for Canada at the World Junior Championship. He made the team and did start in goal, but took a back seat to the tournament’s top tender Steve Mason as Canada won gold in dramatic fashion. Bernier didn’t see the ice after a round robin loss to Sweden.

When he did turn pro Bernier was once again passed over, this time buy current U.S. Olympic goaltender Jonathan Quick, and reportedly didn’t take it that well. http://blogs.myspace.com/index.cfm?fuseaction=blog.view&friendId=426874592&blogId=501691575. However after an average first AHL season, Bernier is having a great season with the 3rd place Monarchs. He leads the AHL in wins, save per centage and is 3rd in goals against average.

I’ll admit that if we did this list earlier this season, Kozun wouldn’t have made the grade, but after watching him play live at the World Junior Championship I was very impressed by the tiny talent. Yes he’s just 5.09 and 164 pounds – atleast that’s what he’s listed as – but Kozun skated with the best of his age group and didn’t look out of place, although his jersey did look quite big. As Kozun stood on the blueline with a silver medal draped around his neck, he had to be thinking about what could have been had he opted to play for the States. You see he was born in LA, and he hopes to return to the Kings soon as a pro. Kozun was passed over in the 2008 draft but the Kings couldn’t ignore a 40 goal-108 point season last year and took him in the 6th round. One stat that likely stood out for LA G.M. Dean Lombardi was that in 34 playoff games, Kozun has 37 points. This year, despite missing time due to the World Junior Championship the Calgary Hitmen forward is battling Jordan Eberle (Edmonton) and Craig Cunningham (undrafted) for the WHL scoring lead with 79 points in 49 games. 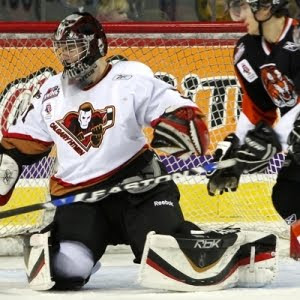 Jones wasn’t drafted by the Kings, but he’s making them look good for signing him after inviting him to their 2008 training camp. This week Jones was named the CHL’s goaltender of the week when he posted 3 wins, a shut out, a ridiculous goals against average of .67 and a save percentage of .978. The Hitmen pipeman leads the WHL with 5 shut outs, 4 of them coming in his last 10 games where he has 8 wins. Jones was a member Canada’s silver medal squad that lost to the United States at this year’s World Junior Championship.