The winged wonders have won the the 3rd most Stanley Cups in the NHL behind only original six cousins Montreal and Toronto. They’ve made the post season an astonishing 18 years in a row, but that’s not to say the organization hasn’t seen it’s fare share of lean seasons. From 1967-1983 they played past the regular season just twice, and went past the first round only once in 19 years at one point. Detroit gets a ton of credit for drafting guys like Henrik Zetterberg and Pavel Datsyuk in later rounds, but even Red Wing scouts have admitted in the past that they were lucky to get those players when they did.

As for who might join Datsyuk and Zetterberg in the next few years, here’s a snap shot of the Red Wings top prospects.

Ferraro missed time at the start of the season due to a knee injury, but has roared back since his return with 37 points in 39 games on a team fighting for a playoff spot in the WHL. It’s interesting that he seems to be more of a set up man this year than a goal scorer, as his 37 lamp lighters indicated he was last year. The son of Ray has just 13 tallies this year and already has more helpers in less games than he did all of last season. Ranked as the best skaters and one of the most offensively gifted forwards in the 2009 draft by one scouting agency, Ferraro’s biggest challenge will be getting stronger and bigger. If the latter doesn’t happen he can always ask his dad Ray how to get a stranglehold on being a small guy in a big man’s game.

Note:I consider Justin Abdelkader as a guy who should graduate from the prospect list as the year continues.

Size, skating and skills with a physical edge. Sounds like the perfect packaged right? That’s why Detroit took the Czech blueliner 19th overall in 2005 even though he had just 14 points in 62 games with the Kitchener Rangers of the OHL. His point totals jumped to 58 in 60 games and 55 in 54 games during his next two campaigns with the Rangers before he joined Grand Rapids of the AHL 2 years ago. The Wings develop prospects at a glacier like pace and Kindl has been no different. He’s in his 3rd full season of AHL hockey with just 3 NHL games on his resume. One reason might be that he’s prone to giveaways at crucial times and Detroit wants to see him rid that from his game before calling him up to Motown. 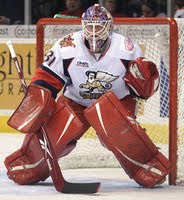 Larson’s first year in the AHL was terrific with 22 wins last season. Year number 2, not so much, although he is playing on the 4th worst team in the AHL. Inconsistency is the name of the game with Larsson. He won 7 straight earlier this year, but has just 5 victories in his last 14 games. He gets the nod over Thomas McCollum for me, simply because of his age. Larsson who was twice passed over in the draft before Detroit took him just turned 24. While Jimmy Howard spent 4 years in the minors waiting for a permanent call up, if Larsson can steady his play, he might cut that waiting period in half. If not, it won’t be long before McCollum zooms past him on the depth chart on his way to Detroit.

Another player Detroit took after his wasn’t selected in his draft year, Tatar has a lot of sizzle to his game. The Slovakian skater can fly and dangle, but his size and defensive deficiencies could be what holds him back. Comparisons have been made to Edmonton’s Ales Hemsky, and like Hemsky Tatar has the ability to slip past defenders hoping to paste him into the boards. If he can shore up his defensive game, then Tatar can be an impact player. 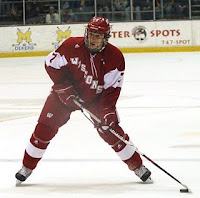 In his 3rd season with the Badgers Brenden Smith is getting some serious consideration for the Hobey Baker award, and it’s not hard to see why. His 36 points in 28 games are the most by any blueliner in the NCAA, and is one point off the team lead in Wisconsin. Twice cut by team Canada at the World Junior Championship, Smith was a forward in junior before the Badgers moved him to the back end. However he hasn’t left his offensive instincts in the trunk. He loves to the rush the puck and passes better then most. A future power play QB in the NHL is what most see in the crystal ball when looking at Smith. If he does win the Hobey Baker, he would become the first Canadian defenceman ever to take home the hardware.

I feel that Tatar is a better prospect than Feraro due to the fact Tatar plays in the AHL at the same age. Although both are going to have to be able to put up top six numbers to play regularly in the NHL due to their size but time will tell.