It sounded like when Brian Burke took over in the ‘Big Smoke’ that he was going to stoke the fire and build it back up into a raging inferno. Then he dealt a 2010 first and second round pick along with a 2011 first round pick for Phil Kessel. Burke did however do a nice job of signing players like Christian Hanson, Tyler Bozak and the monster Jonas Gustavsson in the off season, making up for the team’s average drafting (Luke Schenn aside) in the past. The first cup since 1967 won’t be coming for a few years as the Leafs will have a tough time restocking a baron prospects cupboard.

There are a few guys to watch for though, and here they are. 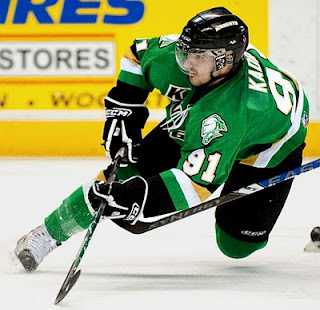 At the time of this writing Kadri is one point off his total from last year in 11 less games. He’s already scored 2 more goals than a season ago and that’s with missing time to play at the World Juniors, although he was on the sidelines with a broken jaw last year. When he put on the maple leaf for Canada, Kadri put up 8 points in 6 games as well as 14 penalty minutes thanks to a running feud with Switzerland’s Nino Niederreiter. All of this after some were predicting that Kadri wouldn’t make the team. Kadri had a pretty good camp, which included a terrific shoot out goal in the pre season and he’s already played on NHL game as an emergency call up. Kadri might not reach 100 points, but he’s only a double minor away from 101 penalty minutes, and he’s never been a minus player during his 4 year OHL career. At +25 right now, that won’t be happening this year. Kadri is a feisty player who is slick enough to avoid checks, but doesn’t shy away from the tough areas. He’s a wonderful play maker but has a good shot that he needs to use more often. Can play both centre and wing.

Brian Burke did a nice job making sure Keith Aulie was part of the 7 player deal he made with Calgary that also netted the Leafs Dion Phaneuf. With Phaneuf, Luke Schenn, Aulie should give the Leafs a solid blueline in years to come. Aulie is huge and combined with Tyler Myers 2 years ago as a fantastic shut down pairing for Canada at the World Juniors. It was during that time that Canada heard what Manitobans had known for a while, Aulie saved his father from drowning after his tractor fell through the ice of their dugout. He doesn’t have to be heroic for Toronto, just play his solid, steady game. He’ll never put a wack of points, but will definitely prevent them. 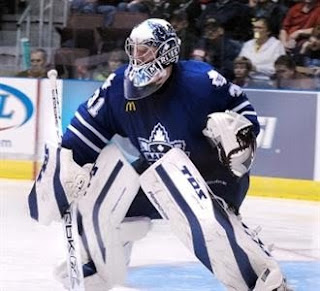 Reimer has played on 4 different teams in 3 different leagues in the last 3 years. Since his junior career in Red Deer ended he’s suited up for the Reading Royals of the ECHL, The South Carolina Stingrays of the same loop and now the Toronto Marlies of the AHL. He hasn’t played a lot this year, missing more than 2 months with an ankle injury, but does have 7 wins in 11 games. Reimer won’t ever be confused with a reactionary goaltender as he’s more of a blocker and with a big frame he takes up quite a lot of net.

He doesn’t go to the most competitive school. He’s not the biggest guy. He wasn’t a high draft pick, but Jerry D’Amigo was one of the best American players at the World Junior Championship, helping the United States win just their second gold medal in tournament history. D’Amigo finished tied for 3rd in tournament scoring with Canadian phenom Taylor Hall, scoring 6 goals and adding 6 assists while registering a plus 7 rating. The 6th round pick is a point per game player through 28 games at R.P.I, and was a stand out for the States at the 2009 under 18 championship with 13 points in 7 games. D’amigo has blazing speed and good hands, and is just as good in the defensive zone as he is on the forecheck making him a pretty complete player and a possible steal for the Leafs in the 2009 draft. 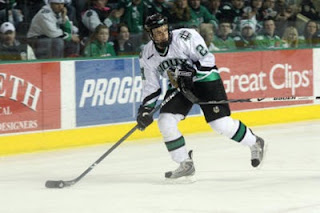 Last year it looked like Matt Frattin’s career was derailed. In July he pleaded guilty to a charge of disorderly conduct after getting caught throwing dishes, a lawnmower and other objects in the street. In August he was charged with a DUI while at the University of North Dakota and was suspended by the team. Recently he was welcomed back to the club and was acquitted by a jury on the DUI charge. Frattin was a 4th round pick in 2007 after an 83 point season in the Alberta Junior Hockey League, where he was named rookie of the year. (photo courtesy Kory Wallen, FightingSioux.com)

AlsoMaking Noise: Chris DiDomenico is just now back playing hockey again after breaking his leg last season. The 6th round pick from 2007 returned on Wednesday and in 2 games has 4 points for the 2nd overall Voltigeurs.
Posted by Dean Millard @ 6:00 AM