The Hurricanes arrived from Hartford in 1997 and have reached the Stanley Cup Final twice, winning the first cup in franchise history during the 2006 season. They’ve also had some lean years where they’ve netted top 5 picks, the best of which was Eric Staal taken 2nd overall in 2003. The Canes are on their way to hitting a second home run when it comes to drafting players from the Red Deer Rebels. Goaltender Cam Ward won the Conn Smythe during the ‘06 cup run, while Brandon Sutter is turning into a terrific all around centre this season with 14 goals and 27 points in 51 games. It was announced this week that the Canes AHL club is moving from Albany, New York to Charlotte, North Carolina, which will mean just a 3 hour drive for prospects getting called up from the AHL.

Here now is a look at some in the ‘Canes system.

Being a Hurricane is all that Boychuk has known, as Carolina drafted him 14th overall in 2008 from the Lethbridge Hurricanes after a 33 goal 72 point season. It was his second 30 plus goal campaign, while he netted 28 in just 43 games during his final WHL year, while recovering from wrist surgery he had done in the previous off season. Boychuk made the Canes out of his first training camp, but was eventually returned to Lethbride after 2 games. Next in line after Boychuk is Drayson Bowman who’s battled injuries in his first AHL season, and Ohio State forward Zac Dalpe who’s 28 points in 22 games leads the CCHA in scoring and should turn pro after 2 college seasons.

Carolina didn’t have a first round pick in 2006, using it to acquire Doug Weight for their cup run. Picking for the first time in the 2nd round they selected McBain out of the U.S. National Development team, knowing he was bound for a great development school in Wisconsin. During his 3 years with the Badgers, the last pick of the 2nd round in 2006 improved his point totals from 18 to 24 to 37 and was considered for the Hobey Baker award in his junior and final season. McBain has good size and is leading the Albany River Rats in scoring from the blueline with 26 points and a plus 6 rating. McBain is gaining confidence each game when it comes to moving the puck and putting on net. His 118 shots in 51 games is 2nd with the Rats. McBain might have been caught off guard by the conditioning you need to play in the AHL compared to college, but he’s catching up now and you can expect him to get off to a flying start next year, maybe even cracking the Canes line up.

The Hurricanes have a stud in Cam Ward but their counting on Justin Peters to elevate his game in the next year and caddy for the 2006 Conn Smythe Award winner. Peters AHL career has been up and down, just like his OHL tenure with St. Michaels and Plymouth, however this year he’s putting together a solid campaign. Reportedly one of the fittest prospects in the sytem, He’s won 18 of his 34 starts for Albany this season and is top ten in wins saves when it comes to the entire AHL>. The second round pick in 2004 was recently called up and picked up his first NHL victory with a 34 save performance against the Islanders February 6th. With Cam Ward on the shelf with a back injury and the Canes well out of playoff contention expect Peters to get some valuable experience. While he’s doing that, Mike Murphy will do the same in Albany. A 4th round pick 2 years ago, Murphy was compared to Dominik Hasek while in junior with is unorthodox style, but as one scout put it ‘all he did was stop the puck’ The former Bellville Bull has become more technically sound since being drafted by the Cane. 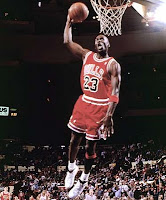 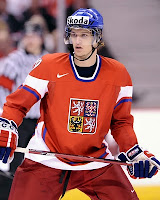 No not that MJ, but he his soaring to new heights like his airness. A 4th round pick 2 years ago, Jordan was the captain for the Czech Republic at the World Junior Championship. While he wasn’t overly offensive for his country, that hasn’t been the case in Plymouth this year. Jordan has already reached a career high in goals with 13, one more then he had last year. Jordan can skate or pass the puck well out of his own end, but needs to bulk up so he can take care of business in his own end at the next level.

Samson went undrafted, but not unnoticed by the Hurricanes. After he notched 44 goals and 99 points in his final QMJHL season split between Moncton and Val d’Or Carolina inked him to a deal in 2007. After scoring 43 goals and 93 points in his first two AHL seasons, Samson leads the River Rats in scoring this year with 19 goals and 40 points in 50 games. Samson is never shy to shoot the puck, and his 231 shots are 52 more then the second place player in the league. Samson’s fine play earned him a 5 game call up earlier this season.

Also Making Noise: 2006 7th rounder Justin Krueger who was born in Duesseldorf is expected to play for Germany at the World Championship this year. Krueger is in his 4th year at Cornell University. The Canes will start the season in Finland next year, which will make it easy for Tommi Kvisto to make it to training camp. Kvisto played in Red Deer last year but elected to return home. The Canes also hope to get a look at fellow 2009 draft pick Mattias Lindstrom when they head across the pond. Lindstrom is in the Swedish Elite League this year.
Posted by Dean Millard @ 6:00 AM