Does Anybody Else Miss Matt Greene? 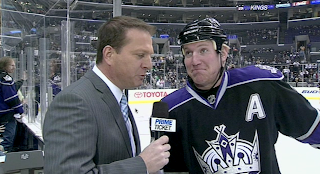 Anyone who has had the good fortune of being around Matt Greene knows how funny the guy is. On the ice he's an intimidating force, the guy you don't want to be anywhere near if you're on the opposition. For the media guys, Greene's always a go-to guy because every time he opens his mouth it's audio gold.

At North Dakota the guys have a long running video series called Brad Miller Time. It's an entertaining look behind the scenes where Sioux players are interviewed by other Sioux players. The current "hosts" of 'BMT' are Brett Hextall (PHX) and Mario Lamoureux and with the NHL on hiatus for the Olympics, several alumni have been around and a couple were guests on "the show".

T.J. Oshie (STL) took time to explain to freshman Danny Kristo (MTL) why he's so unpopular by everyone that follows the team. Oshie taught Kristo some new moves including advice on how to celebrate after scoring a goal.

However, by far the best episode of BMT that I have come across was Matt Greene's mentoring of former Camrose Kodiaks blueliner Andrew MacWiliam (TOR). It made me think back to all the times he had the media here in Edmonton laughing over something he'd said. Sit back and enjoy:
Posted by Guy Flaming @ 7:05 PM

You are not alone Guy. Greene is missed more than I can properly express here. This video is just a reminder of what is missing on the Oilers right now.