The Montréal Canadiens are one of the oldest professional franchises in North American sports, even predating the creation of the modern National Hockey League. With a record 24 Stanley Cup Championships to their credit and a plethora of iconic players to have worn their sweater, the Habs are unquestionably the sport's most historic franchise.

The thought of playing for the Canadiens is a dream for many young hockey players but can also be an intimidating one as well. No hockey market is more volatile (although some may be on the same level) than Montréal as the team is covered by an army of media and are stalked by fans at every turn.

Montréal's primary minor league affiliate is the Hamilton Bulldogs, AHL champs in 2007. Currently the Bulldogs are the top team in the AHL's Western Conference.

Here is a look at the top prospects for the Montréal Canadiens. 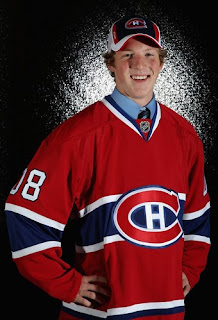 This 2-time member of the American entry for the World Junior Championship is also a standout with the Fighting Sioux of North Dakota. Drafted in round 2 by Montréal, Kristo moved from the US-NTDP to the USHL where he suited up with the Omaha Lancers. Kristo scored 58 points in 50 games and also appeared at the 2008 World Junior A Challenge in Camrose, AB where he helped USA to a gold medal.

Kristo is a terrific playmaker who operates well at high speed. He's a threat whenever he is on the ice and is especially deadly when he has time and space to be creative, like on the power play. He's always reminded me of Edmonton Oiler Ales Hemsky, both facially and in playing style. (Photo: Getty Images)

Not only is he one of the most well spoken and down to Earth players I have ever spoken with but P.K. Subban is also one of the most intriguing. He's been one of the leading d-men scorers in the AHL for most of the season, was named to the All-Star game and scored the game winning shootout goal. Subban has a +25 rating, tops on his team, and yet is still more renowned for his smooth skating and offensive instincts. He's a well rounded prospect who won't be out of the NHL for much longer. 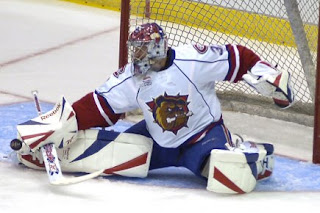 Because the NHL club has two fairly young netminder already on the roster there really isn't a huge concern for prospect depth between the pipes. That doesn't mean the Canadiens don't have s guy worth watching for though, but it might be a reason why the team hasn't made drafting a goalie a top priority since 2005. Still, when they signed Cedrick Desjardins as a free agent a few years back they probably didn't have huge expectations for him. Desjardins played most of his first two years as a pro down in the ECHL but stuck in Hamilton for 30 games last year. This season he's one of the top netminders in the league boasting stellar numbers including a league leading 5 shutouts. (Photo: Canadian Press)

The offensive dynamo went undrafted during his 4-year QMJHL career but at a minuscule 5'6 it's easy to understand why. Despite his two all-star appearances, his trio of +30-goal campaigns and two +100-point seasons Desharnais wasn't viewed by many as a viable NHL prospect because of his size. The Habs snapped him up as a free agent and haven't looked back. Desharnais scored 24 goals and 54 points last year as a rookie in the AHL with Hamilton and has not taken a step backwards. A team source insists that "he will play in the NHL" and judging by his pro success to date, there isn't reason to doubt that he deserves the chance. Desharnais made his Montréal debut in November and played just under 8 minutes. 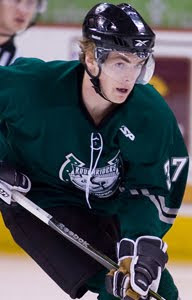 The Rhode Island product is a rookie with the USHL's Cedar Rapids RoughRiders and is having a strong season. Bennett also represented USA at the 2009 World Junior A Challenge in Summerside PEI this past November where he impressed with his strong defensive play. Bennet also appeared in the USHL All-Star game on January 29th and held a +2 rating in the 5-4 Team East win.

The 3rd round pick (79th overall) in 2009 is committed to the University of Michigan but sources tell The Pipeline Show that the Gatineau Olympiques, the QMJHL team that hold his CHL playing rights, are expected to test how strong that commitment is. With several Michigan recruits seemingly wavering or having already jumped ship to the CHL, it will be interesting to see what Bennett decides to do for next year. (Photo: USHL Images)

Also making noise: Brock Trotter leads the Bulldogs in scoring with 48 points and has a +20 rating. The Manitoba native left Denver in the middle of the year in 2007-08 after being suspended by the team. He's undersized and still a bit of a project but may have a NHL future... 2009 1st round pick Louis Leblanc has 17 points in 17 games with Harvard of the ECAC...
Posted by Guy Flaming @ 6:00 AM