The Chicago Blackhawks are one of the "original six" teams in the NHL having joined the league in 1926. Like the New York Rangers, the Hawks have 3 Stanley Cup Championships to their credit - fewest among original six franchises. It has been 39 years since Chicago has captured hockey's top prize, their last Cup victory coming in the 1960-61 season.

From 1997-98 until 2007-08, the Hawks qualified for the playoffs just once, a first round exit in 2002 at the hands of a top rival, St. Louis. Years of futility and aggressive rebuilding strategy allowed the organization to acquire a ton of draft picks over the last decade. In 2004, Chicago made 17 draft day selection including 5 in the first two rounds. The team has become much more North American flavored through the draft than during the 1990's and some would argue that it's a major reason why the club has enjoyed a major turnaround the last two years.

with an extremely talented and young leadership core the Blackhawks are poised for success over the next several seasons. And there is plenty more top recruits Coming Down the Pipe... here is a look at some of the best prospects in Chicago's system. 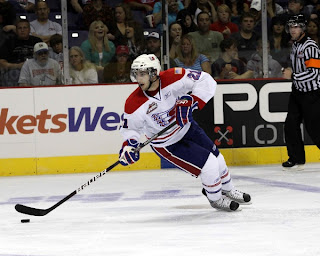 Opinions on one of the WHL's "bad boys" are very polarizing. No one denies the talent that Beach has but the Kelowna native has more than his fair share of critics who cite his past discipline problems as a huge red flag. There have been suspensions, on-ice brawls, fall outs with coaches, feuds with opposing players and an obvious banishment from Hockey Canada. On the other hand there is an aggressive power forward that can snipe, hit, fight and generally antagonize and those are all traits that NHL teams would love to have from a single player.

Beach is having a career year in Spokane, his third WHL team in just over a year, which includes 37 goals and 160 PIM, a combination that is often hard to find. As rough and physical as he can be, Beach also has terrific skill; twice he's scored lacrosse-style goals by scooping the puck up onto his stick blade and depositing it top shelf from behind the net. (Photo: Gary Peterson) 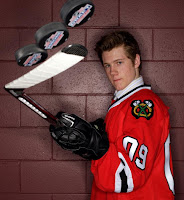 Another 1st round pick in the Chicago system is this former AJHL standout who has been impressive as a freshman in the NCAA this year. Olsen is a defence first player who is known to take the body, move the puck effectively and skate better than most players his size. He's only contributed a single goal this year for Duluth but not much more in that department should really be expected; through two seasons in the AJHL with Camrose, Olsen only notched a total of 18 goals. Olsen is the cover boy for the AJHL's media guide this year.

Olsen was an invite to Team Canada's WJC camp and was considered a strong candidate to make the team. Although he wasn't on the club in Saskatoon there is every reason to believe he'll be on the radar again when the tournament opens in Buffalo next December. (Photo: AJHL) 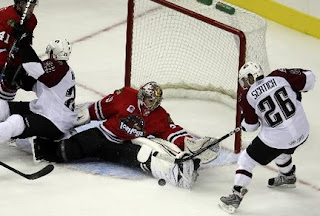 Definitely the shallowest part of Chicago's prospect pool, netminder Corey Crawford appears to be the best netminder the Hawks have outside the NHL. Crawford was originally drafted in the 2nd round way back in 2003 as a member of the Moncton Wildcats. He played 4 full seasons in the Q, then turned pro and he's been in the AHL ever since. To date Crawford has appeared in 7 NHL games, the most recent back in 2007-08. He has worn Chicago gear since then but only in a back up role and has not contributed at the NHL level outside of practice and opening the gate on the bench since then. At the AHL level he is a completely average goaltender, 21st in GAA, 19th in SV% and 20th in wins. (Photo: Josh Gunter/The Plain Dealer) 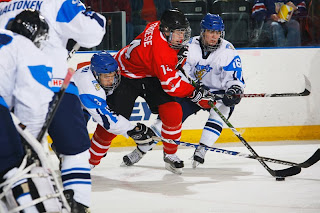 In an organization as deep as the Hawks it might be easy to be overlooked but fans shouldn't forget about this 2009 4th round pick. Froese is all hustle and work ethic and although not blessed with great footspeed, finds a way to get the job done. The Winkler, MB native has grown a couple of inches since his draft year and still has room to fill out but plays with a physical acumen already. Froese had 19 goals and 57 points as a rookie last year and he's already scored more than that this season in 20 fewer games. He played for Canada at last April's World U18 tournament in Grand Forks and performed well. He's a blue collar player that projects to being a 2-way forward as a pro. (Photo: Hockey Canada) 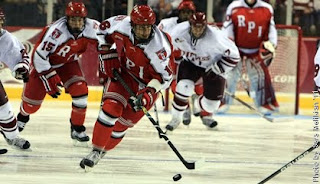 I'll be honest, I wasn't a big fan of Brandon Pirri's when I saw him last year during the 2008 WJAC in Camrose. At the end of the year he had 94 points in 44 games and he came into that tournament hyped as the top draft eligible Jr. A player for the Canada East team. I came away very underwhelmed by his performance there even though he was Canada East's top scorer. That just goes to show what judging a player on a small sample size can lead to. This year at RPI Pirri is lighting it up. The Toronto native has 37 points, tops in the entire NCAA among freshman. He was a 2nd round pick by Chicago last June and so far he's having a terrific year in response. He's outscoring other ECAC rookies like first rounder Louis Leblanc (MTL) and even teammate Jerry D'Amigo (TOR) who played a big role for USA at the 2010 WJC. (Photo: RPI Athletics)

Also Making Noise: Colorado College senior Billy Sweatt has posted career highs in goals and points going 14-14-28 in 30 games so far this year. The 2007 2nd rounder leads the Tigers in scoring... AHL rookie Akim Alui has just 16 points in 41 games this season, I would have to think that those numbers are disappointing for the organization that took a chance on him with a 2nd round pick back in 2007... Chicago recently acquired Minnesota Golden Gophers defenceman Nick Leddy via trade. Leddy was a 1st round pick by the NHL's Minnesota Wild last June...
Posted by Guy Flaming @ 11:56 AM