TPS has learned that back in October the Edmonton Oil Kings added 2009 Oilers draft pick Troy Hesketh to their protected list, meaning should Hesketh decide to play in the WHL, he'll skate in Edmonton. 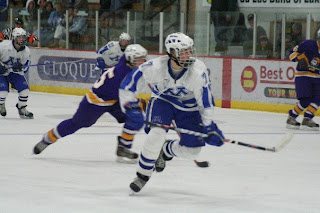 It's an interesting situation surrounding the 3rd round pick from 2009 who has committed to the Wisconsin Badgers of the NCAA. He's playing high school hockey in Minnetonka, Minnesota where he had 22 points in 28 games last year. In 22 games this year he has 17 points, 47 penalty minutes and is plus 35 while the Minnetonka Skippers are the top ranked team in Minnesota and have only 1 loss this season.

I've heard that there are some in the Oilers organization that would like to see Hesketh in the WHL next year, which would give him 2 seasons with the Oil Kings, including one as an overager. His skating is terrific, but the jump from high school to the WHL is a pretty big one. If the Oilers and the player himself think he can play pro in 3 years, then playing in the WHL is the right move.

That's a big if though, and going to Wisconsin isn't a bad decision either for a few reasons. It would give Hesketh up to four years to develop and the Oilers the same amount of time before they have to sign him. The Badgers are a defenceman producing factory with the likes of Brian Rafalski, Ryan Suter and Tom Gilbert who are playing in the NHL now, with Ryan McDonagh, Cody Goloubef, Jamie McBain and Brendan Smith soon to join them. Wisconsin assistant coach Mark Osiecki is widely known among scouts as one of the best blueline developers in all of college hockey.

There's also nothing wrong with Hesketh doing both. He could play one year for the Badgers and he if he and the Oilers feel he needs more of a challenge, he could join the Oil Kings for his 20 year old year. Ultimately the decision is up to the player. The Kings have expressed interest, but G.M. Bob Green isn't the type of person to pressure someone into playing for his team. I've been told Hesketh didn't even know what the WHL was when he was first approached, but maybe the lure of playing in the same building, in front of the same management of the team that drafted him will give him something to think about.
Posted by Dean Millard @ 7:00 AM

I don't think there's a bad move for the Oilers here. On one hand, having one of your prospects in your back yard gives you a lot more access to the player and (at least in theory) more imput into his development. On the other, he goes to a top notch college program where he'll get lots of experience playing with, and against, players in their early 20s.