The NHL returned to the State of Georgia in 1999, almost 20 years after the Atlanta Flames moved north to Calgary in 1980. The Thrashers, a name selected by fan ballot, took to the ice in the Fall of '99 and won just 14 times in their first season. The team has finished with a losing record in 7 of the 9 seasons it has taken part in and is currently teetering near the .500 mark this year.

The Thrashers have had their fair share of star power but have never been able to build a winner. Dany Heatley, Ilya Kovalchuk, Marrian Hossa, Marc Savard and Salva Kozlov have all worn the Thrashers sweater (some at the same time) and yet the team has failed to even win a single playoff game let alone a series.

A combination of poor drafting and even worse asset management has hampered the team's chances at improvement. Still, there are players in Atlanta's system that could help the team get to where they want to go. Here is a look at some of the best of that group... 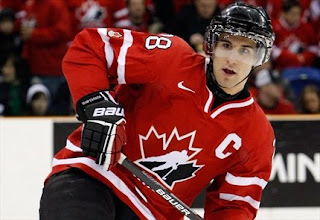 There are a few different ways to view Atlanta's recent addition of Cormier; was it a case of New Jersey having to give up quality to get quality and so Cormier was part of the package donated to the Thrashers for Ilya Kovalchuk, or, was it a case of the Devils ridding themselves of a problem?

Patrice Cormier is currently on suspension from the QMJHL for his brutal and blatant elbow to the face of Mikael Tam of the Quebec Remparts. It was the second of two similar plays (the first coming during a WJC exhibition game against Sweden) and apparently the final straw to many Cormier critics.

Does the former 2nd round pick have the talent to play at the NHL level? Maybe. Probably. But he's also damaged his reputation significantly with his play since December. Prior to then, Cormier was viewed as a character player with terrific leadership qualities. Now? There are questions.

He's not a superstar and is more likely projected to be a 2nd or 3rd line guy at the pro level. still, if Cormier can find his old form as a player then he should prove to be a valuable prospect for the Thrashers. (Photo: Matt Manor Hockey Canada) 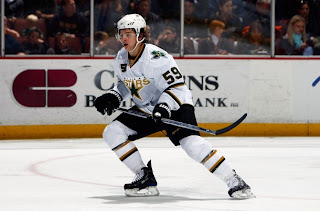 Until a week ago the player I was going to slot in this category was Paul Postma. That changed when Atlanta dealt former 1st round pick Kari Lehtonen to Dallas in exchange for a 4th round pick in 2010 and 2006 1st round pick Ivan Vishnevskiy. Some considered Vishnevskiy to be the top prospect in Dallas' system as the Russian appears to be developing well in the AHL after 3 seasons in the QMJHL. Like Cormier, Vishnevskiy joins the Thrashers organization with Rouyn-Noranda on his resumé. The blueliner had three productive years with the Huskies before turning pro in 2008-09.

He'll celebrate his 22nd birthday later this week and it might possibly his last as an American Hockey League player. As the Thrashers continue to reassemble their organization after trading two significant assets, the NHL future for Vishnevskiy might be more clear in Atlanta than it was in Dallas. (Photo: Getty Images) 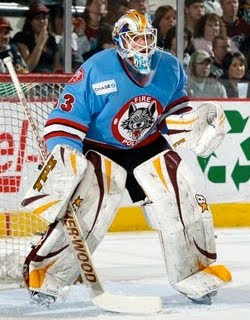 Also celebrating a birthday this week is former Denver Pioneers goalie Peter Mannino who turns 26 on Wednesday. He's worn 5 different jerseys in the last 3 seasons (4 since turning pro last year) but that shouldn't be seen as a negative sign. Mannino was signed by as a free agent last July after he played a year for the New York Islanders, mostly on the AHL squad in Bridgeport. He's got a NCAA National titles under his belt as the Pioneers won back-to-back titles in 2004 and 2005, the latter with Mannino in net. He's only appeared in 22 games thsi year as he platoons with Drew MacIntyre but by comparison, Mannino's numbers are far superior to his partner's. He'd still have to be considered a bit of a long shot at this point but the Michigan native could still fashion out a NHL career for himself. (Photo: AHL Images) 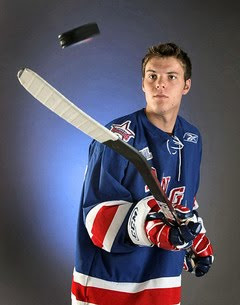 It's a little hard to believe now that Morin was still available halfway through the second round when you look at the numbers he's putting up in the OHL this year. Morin has 69 points in 47 games with the Rangers and was also a point per game guy for gold medal winning USA at the 2010 WJC in Saskatoon with 2 goals and 5 helpers. Considering he was Atlanta's third pick at the 2009 draft and prospect site Hockey's Future currently slots him 9th among Thrashers properties, I think he's deserving of the underrated moniker at this point. (Photo: David Lassman/The Post Standard) 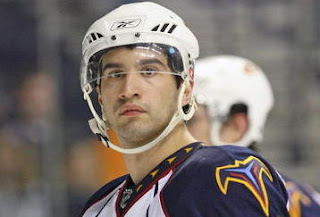 It's been a tough 18 months for Esposito who was limited to just 35 QMJHL games last year and was lost for the entire season in late November with a knee injury. Back-to-back years with serious injuries can play havoc on a player's development and the lost time will undoubtedly affect Esposito, a former 1st round pick of the Pittsburgh Penguins. The skilled forward has been criticized in the past for a lack of desire and motivation and it's hard to tell how much he's addressed those issues with all the time off he's had. (Photo: Frederick Breedon/Getty Images)

Also Making Noise: Former Vancouver Giant Spencer Machacek leads Thrashers prospects in scoring at the AHL level with 30 points in 54 games... netminder Chris Carrozzi is having a terrific season with the St. Mike's Majors in the OHL. He's at or near the top in every goalie category on a league scale. He was recently a guest on The Pipeline Show to talk about it... Center Riley Holzapfel's production is off his pace from his rookie season last year. He currently sits with 20 points for the Wolves... Defenceman Paul Postma struggles to produce at the AHL level. He had 84 points in the WHL last season but has just 11 this year with Chicago... Defenceman Arturs Kulda has been recalled by Atlanta...
Posted by Guy Flaming @ 5:30 PM