The Wild have drafted in the top 5 only twice in their 10 year existence. They did well with Marion Gaborik, until he left the team as a free agent. They didn't have as much luck developing Benoit Pouliot and he has since been moved to Montreal.

Here are some players Wild fans hope they have some more success with. 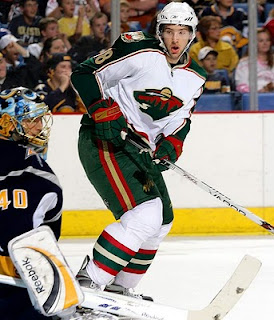 A huge power forward who I think was mismanaged by the Wild early on. He spent his first full year as a pro watching mostly from the press box or bench when he could have been dominating in junior with Saskatoon and playing for Canada at the World Junior Championship. This year he has spent the whole season in the AHL.
When Gillies gets things into high gear he is tough to stop, but while he played centre in junior he might be a better fit as s winger in the NHL. Gillies gives you power, strength and smarts – with that combination will come some point production – he did have 24 goals in his final year of junior in just 58 games, while adding 8 points in his first 11 AHL games.

Cuma has everything you want in a defenceman. Size, skill, and shut down ability. Now he has to regain confidence and make sure he still has the mobility that made him a first round pick in 2008. He was drafted 23rd overall and would have cracked the Canadian World Junior team had it not been for a MCL injury before the camp. Cuma was invited to Canada`s camp again this year but failed to impress a new coaching staff. That is the challenge in front of him now in Minnesota as well. When Cuma almost made the team in his draft year, Jacques Lemaire was behind the bench and Doug Risebrough was the G.M. Now it is Chuck Fletcher making the calls with Todd Richards behind the bench. As long as he is healthy though, Cuma should have no trouble making an impression. If Cuma and the Ottawa 67`s can carry a solid regular season into the playoffs, Cuma will get some bonus time to make a case for patrolling the Wild blueline next year. 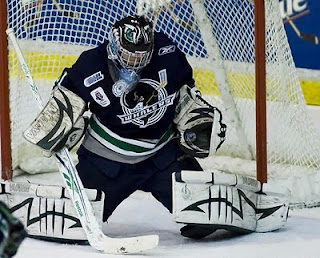 Hackett was the 5th goalie chosen in 2009, but after his season in Plymouth so far, some think he might turn out to be the best of the bunch. Now it should be noted that he is a year older than this pears, as Hackett was passed over in the 2008 draft. That is a fact that Wild fans and management do not care about though as long as he turns out, and this year that is looking like the case. Hackett played 55 games last year, he has reached 50 as of this writing. He is just 3 wins shy of his previous totals and has lowered his GAA and save per centage considerably as Plymouth is just one win shy of their totals from a year ago. Now a guy named Tyler Seguin has something to do with that, but Hackett certainly deserves a good portion of the credit as well.

If Matt Hackett does not pan out for the Wild, it seems they have a back up plan in Darcy Kuemper. The Red Deer Rebels keeper, like Hackett has played 50 plus games in the last 2 years and has Red Deer solidly in a playoff position. Kuemper is top ten in goals against average and saver per centage and top 5 in wins. He did not get a lot of respect in the 2009 draft and was available when the Wild took him in the 6th round. Kuemper has great size and is a key reason the 2001 Memorial Cup champions are returning to the post season for the first time in 4 years.

Scandella became the 2nd player from Canada`s World Junior team to be suspended once he returned from the tournament. After Patrice Cormier was given a regular season ban (which his Rouyn-Noranda Huskies are appealing again) Scandella delivered a nasty elbow that earned him a 15 game suspension from the league. Scandella was drafted in the 2nd round of the 2008 draft, the 2nd blueliner taken after Tyler Cuma. He is a gifted rearguard who despite the suspension does not have a reputation as a dirty player, but rather uses his size to his advantage.