The Vancouver Canucks joined the NHL in 1970, increasing the Canadian content in the league to three teams at the time. Despite their 40-year existence, the Canucks have never won the Stanley Cup and in fact have only been to the Finals twice in that time. The closest the team has come to winning it all was back in 1994 when they took the New York Rangers to a 7-game series.

While the team is Western Canada's oldest NHL franchise, the Canucks have largely been overshadowed by the success of the two Alberta clubs which have won 6 Stanley Cups between them since joining the league much later. Since Calgary and Edmonton joined the league, Vancouver has claimed the division title only 5 times but, 3 of those years have been in the last 5 seasons played.

Notable players drafted by the Canucks who have gone on to have a significant impact of the team's performance have included Trevor Linden, Stan Smyl, Henrik and Daniel Sedin, Don Lever and Pavel Bure.

Here is a look at the top prospect Coming Down the Pipe for the Vancouver Canucks... 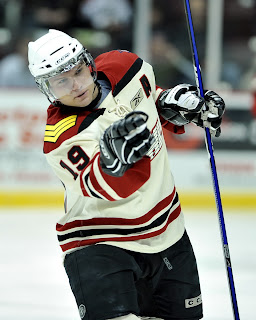 He was drafted 10th overall in 2008 but Hodgson's stock took off the following year after a tremendous 92-point campaign in Brampton and an inspirational performance at the 2009 World Junior Championship. The Hockey News ranked him as the #2 prospect on the planet but placed him on the cover of their Future Watch '09 issue. Everyone expected that the talented forward would crack the Vancouver roster this past fall and would be a legitimate contender for the Calder trophy.

However, injured during dry land training in July, Hodgson was not 100% for camp and his play during 6 exhibition games failed to earn him a NHL spot. It was reported recently that there is now a rift (to some degree) between Hodgson and Dave Gagner, the development coach for the Canucks, in regards to training in the off season. Hodgson missed the first 5 months of the CHL season while recovering from a bulging disc in his back, an injury that he either failed to report accurately to the Canucks during camp or that the Canucks failed to address properly. Head coach Alain Vigneault made comments after training camp which seemed to indicate the team felt Hodgson was exaggerating the injury to cover up for mediocre play.

There is no question that Hodgson is a top prospect for most teams in the NHL but one has to wonder if the player and the franchise will ever be on the same page again. (Photo: Aaron Bell OHL Images) 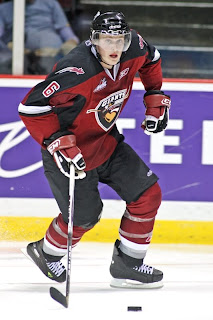 While some will argue that Yann Sauve deserves top spot in this category I'm opting to go with the guy who has really raised his stock this year with his performance in the WHL. Currently Connauton is the second highest scoring defencemen in the league, just one point behind Tyson Barrie for that mark. The Edmonton product is with his third team and third league in as many years. He moved from the AJHL's Spruce Grove Saints to the NCAA where he played one season for Western Michigan before jumping to the CHL. In Vancouver, Connauton saw the opportunity to play for an annual powerhouse that also happens to be in the backyard of the franchise that drafted him. The decision has likely paid off as his massive production this year has got to be an impressive surprise to the Canucks and probably to himself as well. (Photo: C.J. Relke) 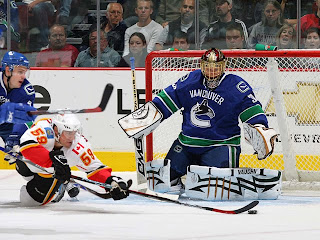 If he was in most other organizations, Schneider might already be in the NHL. Unfortunately for him, his NHL club has one of the best netminders in the game today and with a long term contract, he could be waiting for a long time to get into a regular role with the Canucks. A lot of people think that Schneider will be dealt because his large value to other clubs would enable the Canucks to get significant immediate help as they try to contend for their first Stanley Cup. Schneider's numbers are slightly down this year but so is the performance of the Manitoba Moose - AHL finalists last season who are third in their division this year.

Schneider's NCAA career was outstanding and his play as a professional has only further cemented to idea that he's one of the top goalie prospects in the game today. Unfortunately, when he's had the chance to play in the NHL he's faltered going 2-5-1 in 10 appearances. 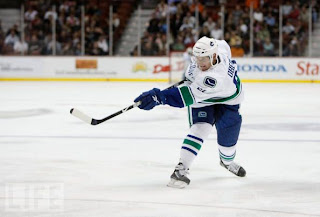 There were a few players I considered for this category but I chose to go with the 21-year-old defenceman that leads the Moose in scoring from that position despite being a rookie. Oberg spent two years in the AJHL with the Camrose Kodiaks before moving on the Minnesota-Duluth Bulldogs where the Canucks signed him as an undrafted free agent. His 17 points might not sound like much but it is the highest among Moose blueliners and considering his paltry 165-pound frame, I think it's worth noting that Oberg is getting it done at the AHL level where others are failing. (Photo: Jeff Gross Getty Images) 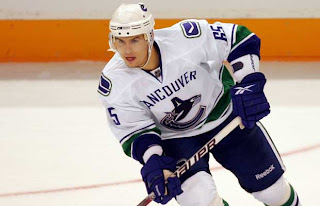 Was it much ado about nothing? Sergei Shirokov's arrival in North America had Cancuks fans giddy with excitement but when he failed to make the NHL roster out of camp that buzz was reduced to a tremor. Still, Shirokov has played well on the farm and earned his spot at the AHL All-Star game where he scored two of Planet USA's 9 goals in a 10-9 loss. There's no question that the player is talented and in the long run, a stint in the AHL might prove to have been the best thing for him. Considering the growing trend of Russians returning to their homeland rather than playing in the AHL, one has to wonder what would happen next year if Shirkov again fails to crack the NHL roster. There's also a 20-pound difference between the AHL and NHL roster reports for the Russian's weight... (Photo: Ezra Shaw Getty Images)

Also Making Noise: Anton Rodin's performance at the 2010 WJC in Saskatoon certainly caught the attention of those covering the event. Rodin had 10 points, second most on his team, and was part of a deadly trio alongside Magnus Paajarvi-Svensson and Andre Petersson... Saint John forward Steven Anthony was having a career year but has gone ice cold lately. With just 3 points in his last 10 outings, the 7th round pick is well off his early season pace... Minnesota Golden Gophers forward Jordan Schroeder had a horrible first half to the NCAA schedule but has been red-hot since mid-December. The 1st round pick has 13 points in his last 10 games and also had 8 points in 7 games with USA at the WJC during that time as well.
Posted by Guy Flaming @ 11:19 AM