The Florida Panthers joined the NHL back in the 1993-94 season and their early years were very promising. They barely missed the playoffs in their first year of existence and in year 3 they actually reached the Stanley Cup finals, a 4-game sweep at the hands of the Colorado Avalanche.

Unfortunately for Panthers fans, their team has only made the playoffs twice since their run to the 1996 finals, and have not seen the post season since 1999-00.

Florida has consistently worn one of the ugliest jerseys in the NHL and recently added a third sweater design that is a departure from their usual red-gold-blue disaster. However, the current alternate is basically an unoriginal mock up of the Springfield Falcons with a borrowed Quinnipiac Bobcats crest. No points for originality but at least they look a lot better.

Some of the key figures to have worn the Panthers jersey include Pavel Bure, Roberto Luongo, Scott Mellanby, Igor Larionov, Uwe Krupp and Jay Bouwmeester. Florida's prospect pool features some highly touted players and the hope is that they'll help the franchise back to the playoffs and eventual to the finals once again.

Here is a look at what's Coming Down the Pipe in Florida... 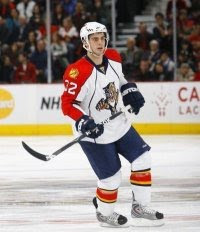 The former Vancouver Giant led the Americans in scoring last year as a rookie with 49 points and had he played the entire season on the farm once again, surely he'd do the same this year. He's already matched his goal total from year one but with only 45 games under his belt. Repik has appeared in 14 NHL games this season and has earned 4 points in the process.

He's undersized but highly skilled; he had three consecutive +20-goal, +50-points years in the WHL before turning pro and was considered Vancouver's most dangerous forward at the end of his junior career. The Czech native has a realistic shot at sticking with the Panthers out of camp next year especially if the Cats make some deals at the deadline and move some people out. 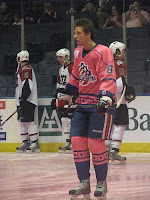 With Russian Dmitri Kulikov completely bypassing the AHL and solidifying himself in the NHL, Florida's top blueline prospect is now Alberta native Keaton Ellerby. After a strong debut with the Americans last year, Ellerby isn't seen as taking a big step forward this season; he's on pace to equal but not really improve on his numbers from his rookie campaign. The long-time Kamloops Blazer who once, with a phone call to his cousin (and part owner of the Blazers) Shane Doan and his NHL partners, helped engineer his own WHL trade to Moose Jaw, has yet to live up to draft year expectations. Drafted 10th overall in 2007, he was pegged as a highly offensive player with skating ability that could take him to the NHL in a hurry - that clearly hasn't happened yet. (Photo: Rochester Americans) 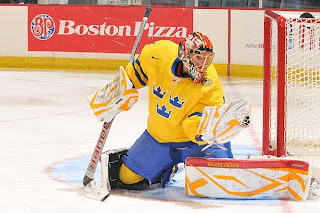 Quite possibly the steal of the 2008 NHL Entry Draft, Jacob Markstrom was a 2nd round pick and the 3rd goalie taken that June. He's now considered by many, including The Hockey News in their annual Future Watch issue, to be the best goalie prospect on the planet. The big Swede is playing in his second full season in the Elite League and has posted very impressive numbers once again including his 2.02 GAA and .928 SV%, both being tops in the SEL among starting netminders.

Markstrom was in net for Sweden at the 2010 World Junior Championship and was impressive early on. However, like in 2009, his finish to the tournament left people questioning his ability to show up for the big game. Despite the hype and his resumé, Markstrom was not named the tournament's top goalie in either year that he played in the WJC. (Photo: Matt Manor IIHF-HHOF Images) 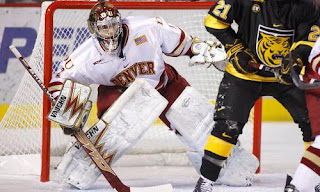 He was one of the last players chosen in the 2006 draft, a 7th round pick by Florida that keeps looking better and better every year. Cheverie is a Nova Scotia native who moved from the East coast to the West coast to play for the Nanaimo Clippers of the BCHL. He spent two years with the Clippers and that was after a season in Wilcox Saskatchewan where he played with the legendary Notre Dame Hounds.

Cheverie has been the goalie for the Pioneers for two seasons now after playing only 5 games as a freshman. He burst onto the scene last year winning 23 games and holding a .921 SV% in the process. This year he's been remarkable for Denver both before and after his left calf was accidentally sliced open by an opposition skate. He missed three weeks as a result of the injury but returned to post a shutout against rival North Dakota - his 4th of 6 shutouts this year. Cheverie has size, quickness and sound positioning making him one of, if not the best goaltender in NCAA hockey, a prime reason that he's a leading contender for the Hobey Baker Award. (Photo: Denver Pioneers Athletics) 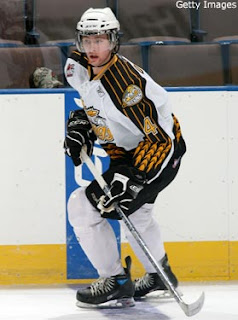 With Brandon hosting the Memorial Cup this year, Florida knows that Robak is going to get a ton of valuable experience playing in top caliber competition. This year the 2008 2nd round pick has been potent offensively for Brandon and their loaded line up; 60 points in 3rd best among WHL defencemen. A very effective and accurate passer, Robak is known for starting the play from his own end and has the ability to hit a streaking forward with a long bomb, breakaway pass. (Photo: Getty Images)

Also Making Noise: 3rd round pick Josh Birkholz hasn't had nearly as good a year as most expected after being a standout with both the Fargo Force of the USHL and the USA entry at the 2008 World Junior A Challenge in Camrose, AB... Denver freshman Drew Shore has compiled 15 points with the Pioneers this year. He was a 2nd round pick at the 2009 Draft... A.J. Jenks, a 4th rounder from 2008, helped USA capture the gold medal at the 2010 WJC in Saskatoon... North Dakota freshman Corban Knight has chipped in just 9 points this year but, like Birkholz, is playing relatively small minutes on a team with more much seniority and talent than most...
Posted by Guy Flaming @ 11:22 AM