The NHL could be found in the San Francisco area back in the late 60's and mid 70's but when the Oakland/California Golden Seals moved to Cleveland, hockey fans were out of luck. Then in time for the 1991-92 season, an expansion team was granted which also included a smattering of Minnesota North Stars players and the San Jose Sharks were born.

There were lean years in San Jose but the Sharks have grown into a ferocious regular season franchise. Unfortunately, once the playoffs begin, tradition has shown that the Sharks loose their bite and fall to the wayside.

San Jose has become an organization that is well respected for their drafting success and for also being aggressive on the trade front and free agency as well. Some of the big names who have played for the organization over the years have included Rob Blake, Joe Thornton, Jeremy Roenick, Arturs Irbe, Owen Nolan, Vincent Damphousse and Doug Wilson who is currently the club's General Manager.

Here is a look at some of the bigger fish in San Jose's prospect pool... 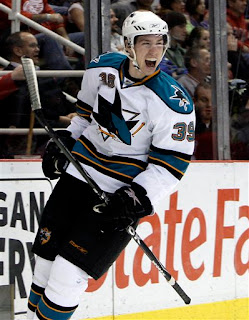 The Sharks have always been a team that identifies the player they want in the draft a just makes sure that they get him. The Sharks made a couple of trades, dealing Vesa Toskala to Toronto for their 1st round pick and then they flipped that to St. Louis and ended up with the 9th overall selection. That turned into Ottawa 67's forward Logan Couture.

He's battled mono, never really gotten a crack at representing Canada at the World Junior Championship and 87 points was a career high point total for him during his 4-year OHL career. Expectations for Couture have been blown out of the water this year thanks to terrific production at the AHL level in Worcester. His 1.36 points per game pace has Couture second on team scoring and he's only dressed for half of the games. 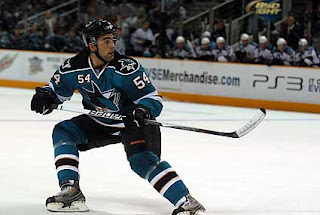 I remember when Petrecki played in the 2006 Viking Cup for USA, the season before his draft year, and the scouts in attendance speculated just how high he'd go the following June. Petrecki was taken 28th overall in 2007, the same draft class as Couture. After his USHL days with Omaha ended, Petrecki joined Boston College where his reputation as a rough and ready blueliner grew even more. The New York native left college after his sophomore year and is now nearing the end of his rookie season in the AHL. He's an imposing figure on the backend in Worcester, a 6'4 hitting machine that isn't afraid to fight. He's of the Jason Smith mold when it comes to style of play but some have questioned how intelligent he actually is on the ice; decision making needs to be quicker and smarter. 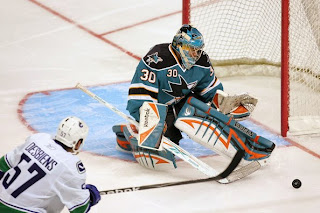 This was a tough decision. With Harri Sateri, Tyson Sexsmith and Thomas Greiss in the system there are a few options in this category and none are bad. Heck, even Thomas Heemskerk with the WHL's Everett Silvertips is playing well this season. I chose Stalock because the former Duluth Bulldog has helped backstop the Worcester Sharks to the second best record in the AHL's Eastern Conference. He played 2 years in the USHL with Cedar Rapids before moving on to Minnesota-Duluth for 3 seasons. Now as a AHL rookie he's leading all netminders in the league with 31 wins. 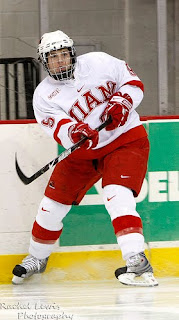 Wingels was a 6th round pick by the Sharks in 2008 and the Illinois native has proven his worth during his 3 years at Miami. Wingels was a key contributor for the RedHawks on their way to the National Championship game last April. This year he's surpassed his career highs in all offensive categories and is second on the team in scoring. The junior is a solid two-way player that can play a physical brand of hockey but is also competent with a skill style as well. Wingels skates well, can score or make plays and he's a leader; an all around talent that is well worth the pick San Jose used on him.

He leads the Sharks' AHL affiliate in scoring and is producing at a slightly less than point-per-game pace. Not bad for a 5th round pick coming out of Clarkson University. Zalewski isn't exactly a household name but the Utica, NY product is getting attention from the organization that selected him back in 2004. The forward made his NHL debut this year appearing in 3 games.

Also Making Noise: 6'8 d-ma Taylor Doherty is having a breakout year in Kingston with the OHL's Frontenacs. His 35 points are already well past the 20 he contributed last year in his NHL Draft season.... Tony Lucia's Gopher days at Minnesota are coming to an end. The senior is riding a career year as his NCAA eligibility expires in a couple of months. His dad, head coach Don Lucia, is also expected to be done with the Gophers program.
Posted by Guy Flaming @ 6:00 AM