The Flyers last 3 first round draft picks have turned out pretty well. Claude Giroux and James van Riemsdyk are starring for the team, while they turned Luca Sbisa into Chris Pronger at last year’s draft. In 2009 they didn’t have a first round pick. They’re best work came in 2003 when with 2 picks snagged franchise players Jeff Carter and Mike Richards. They also selected Colin Fraser and Ryan Potulny who are playing regular shifts with other organizations.

Now here is a snap shot of the Flyers top prospects.

Maroon is a great story. He grew up in St. Louis but travelled quite a bit in his junior career starting in Texarkana, then back to his home town before spurning Ferris State for the London Knights of the OHL after Philadelphia took him in the 6th round of the 2007 NHL draft. Maroon was a balloon in junior, playing at 250 pounds. He cut weight, and kept his scoring touch, torching the OHL for 35 goals and 90 points. He led all rookies in scoring, but lost out to Taylor Hall for the rookie of the year honours. 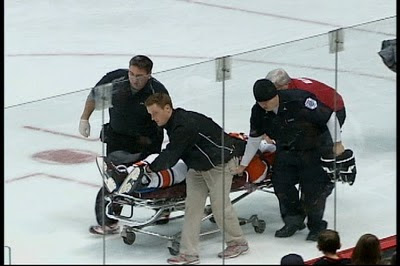 Maroon turns 22 this April and is in his 2nd full AHL season with the Flyers farm club. After a 54 point season last year Maroon’s total’s won’t be as high this year, but that’s because he missed almost a month after suffering a serious injury December 30th against Albany when Nic Blanchard hit him from behind. Maroon had to be taken off on a stretcher and spent the night in hospital. At the time of the injury the power forward was really heating up with 9 points in 8 games. After returning to the line up, he picked up where he left off. He scored twice and set up another in his first game back, the start of a 5 game point streak. I’ve never seen him play live but from those I’ve talked to he’s not the smoothest skater but does get the job done. He could be another Mike Knuble who the Flyers sorely miss this year.

The Flyers look pretty set on the blueline and dealt away their top defenceman prospect in Luca Sbisa to get Chris Pronger at last year’s draft. There isn’t a ton of offence coming from the back end other than Marc-Andre Bourdon who was an offensive dman in junior but is feeling his way into the AHL. Bourdon might not be the skater that Sbisa was but his QMJHL defenceman of the year award in 2009 might suggest he could be a solid all around rear guard. He has great size and with 23 fights between junior and the AHL (according to www.hockeyfights.com) it shows he’s not afraid to stick up for teammates. He racked up 100 plus PIM in his last 2 years of junior and as a PIM per game in his rookie AHL season. Because of the Flyers blueline situation it might take Bourdon a while to crack the NHL club, but that’s not necessarily a bad thing, it will allow him to work more on the reward then the risk. 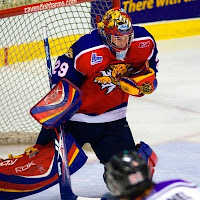 Riopel started the season in the AHL before getting sent back in mid December and winning 11 of his first 12 starts in Moncton. He hasn’t faced a ton of rubber with the Wildcats, as only once he’s stopped more than 30 shots. Riopel has been a study in determination. He wasn’t drafted in 2008, went to camp in Montreal but wasn’t signed, so he returned to junior where he won more than 40 games, led the league in goals against average and setting a QMJHL record in the process. He was also named the league’s player of the year. Like most Quebec goalies he gets across the crease very well and has the technical side of the game down to a science. Should be the every day starter with the Phantoms next year.

Wellwood has evolved quite well in his junior career, going from a checking forward to a point producer last year with the Memorial Cup winning Spitfires. He had 34 points during the regular season, but added 21 in 20 games during the Spits playoff run and 4 more in the Memorial Cup. He’s not that big, but neither is his brother Kyle who’s fashioned out an NHL career and Eric is said to be more of an all around player. He’s also taken on a bigger role with Windsor this year offensively. He’s 5th on the team in goals and points on a team stacked with fire power, which is pretty good production for a 6th round pick.

The hockey world was shocked when Stefan Legein, then in the Columbus Blue Jackets system, decided to quit 2 summers ago. Legein said he simply lost the passion, which was hard for people to believe after watching him at the World Junior Championship with Canada that year. Sometime last year the passion returned, and so did Legein, rejoining the Jackets top farm team in Syracuse. However his stay there lasted just 6 games before he was dealt to the Flyers, giving the Flyers a different kind of 'Legein of Doom.' There’s no doubt Legein can play with 19 goals in 46 games. Legein has speed to burn and is perfectly suited for an agitators role if he ever reaches the NHL.
Posted by Dean Millard @ 6:00 AM