Atlanta's loss was Calgary's gain in 1980 when the Flames relocated from the Southern United States to Southern Alberta. It didn't take long for the club to have success as the Kent Nilsson led Flames reached the playoffs in their first year after the move. Not being an expansion team undoubtedly helped speed up the process but in just a few years Calgary had one of the best teams in the NHL.

Unfortunately for Calgary in the 1980's, they shared a division and Province with the Edmonton Oilers. For a handful of seasons their own dominant teams were beaten by the Gretzky-led juggernaut to the North. The Stanley Cup Finals were played in Alberta 7 times during the decade with the Flames involved twice and winning once, in 1989 against the Montréal Canadiens.

There have been a plethora of NHL Superstars to have worn the "Flaming C" over the years including Lanny MacDonald, Theo Fleury, Jarome Iginla, Joe Nieuwendyk, Mike Vernon, Al MacInnis, Brett Hull and Doug Gilmour.

Here's a look at the next wave of Flames Coming Down the Pipe... 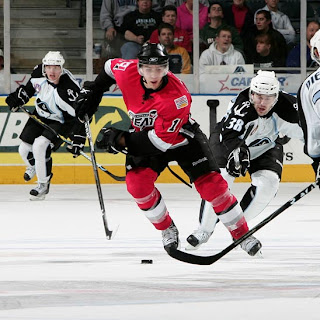 Is he NHL ready or not? 28 points on the farm this year don't exactly scream "call up" and yet the Swede reportedly played well enough during his 9-game pre-Olympic NHL stint that he may rejoin the team when the event is over.

To be honest, I was looking for a reason to put another forward at the top of the heap for Calgary. Backlund's invisibility during the Memorial Cup (aside from one ridiculous goal in the first game) left me wanting much more. He was more hot than cold with Kelowna last year but consistency was definitely an issue for the former 1st rounder. But there is no question that, among Flames prospects, Backlund's got the most potential. Other guys might be having terrific seasons but no one has the upside that Backlund does so he gets top billing. (Photo: Scott Paulus/AHL Images) 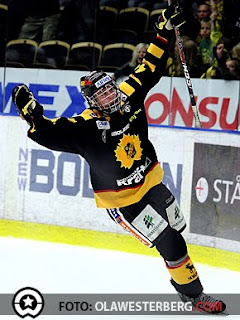 I like a few of the Flames blueline prospects and I remember thinking prior to the 2009 Draft that with John Negrin, Matt Pelech and Keith Aulie (since traded to Toronto) already in the system they probably wouldn't need to make that position a top priority. When Swede Tim Erixon was chosen I was a bit surprised but as deep as the organization was already, they had just solidified the position for a few years.

Erixon is in his second year of Elite League play with Skellefteå where he has 9 points, a slight increase from his 7 rookie points last season. The American born d-man also played in the 2010 World Junior Championship for Sweden and contributed 3 points in 5 games. Elite Prospects describes Erixon as non-flashy but accomplished in all facets of the game. I've talked to scouts who rave about his hockey sense; knowing when to jump into the rush and get involved offensively or when it's time to play defence. He can play in any situation and that versatility makes him a valuable asset for the Flames.

Some pictures can be deceiving... like with Backlund, Irving gets the nod here based more on potential upside than actual performance this year. Anyone who knows me knows that I've long felt that the Flames had one of the best group of goalie prospects in the NHL but I'm starting to think that either I overrated these guys or that they've failed to reach their potential. Matt Keetley has been decent in the AHL but the guy getting the starts right now is David Shantz and I've never been a fan of his. Leland on the other hand, the 1st round pick in 2006, has not only lost his starting job in the AHL but has been bumped down to the ECHL to get playing time. Unfortunately, in 7 games with the Victoria Salmon Kings, Irving has compiled a 2-3-2 record! Irving has only one AHL victory since the end of November. It is quite possible that Irving is no longer Calgary's best goalie prospect but he's still the guy with the pedigree to one day be the man. fortunately for the Flames, they have the luxury of time to allow him to develop in the minors while Miikka Kiprusoff holds the fort at the NHL level. (Photo: Bob Frid/BC Hockey)

For a guy who is the third highest goal scorer in the WHL this year, Ryan Howse's name certainly seems to get lost. The 3rd round pick has taken another big leap ahead in his production from his previous season where his 44 points was considered a breakout compared to his rookie campaign. Howse leads the Bruins in scoring once again and for his efforts is quietly getting some recognition by those in the league. Howse was recently ranked among the WHL Western Division's best players in several categories including Most Valuable to his Team (2nd), hardest shot (4th), Most Accurate Shot (1st), Most Improved (4th) and Best Pro Prospect (3rd). The Prince George native was 1st ever Bantam Draft pick, 3rd overall in 2006.

The 2006 3rd round pick of the Flames has been in hot water a couple of times this year, both for dangerous hits. The first was a blatant hit from behind on North Dakota's Chay Genoway which knocked the Sioux captain out of action for several games. Marvin received a 1-game suspension for that infraction but apparently that wasn't enough to jog the thinking muscle between his ears. A week ago Marvin was at it again, this time with an open ice hit to the head of Blake Geoffrion:
Geoffrion has a concussion and will miss this weekend's series against Michigan Tech. Somehow Marvin didn't even get a penalty for this one although it was speculated by his own coach that he'd eventually be suspended by WCHA officials for the blindside hit.
Posted by Guy Flaming @ 8:00 AM

Interesting that you bring up Marvin here. The kid has had a rough year, no question, but I think he's kind of brought it on himself and needs to have better awareness of his on-ice actions. He knocked out Genoway for likely the season, and who knows if Geoffrion will play again this season, hopefully he does. Some feel Marvin's being victimized, but I don't agree with that. Hope he figures things out fast before someone else gets hurt and his reputation is further damaged.