The Edmonton Oilers released the names of the attendees for their summer prospect camp which begins on Monday. Here's the official list from EdmontonOilers.com and after the jump I will introduce you to the non-Oilers players who are coming to Millennium Place after getting an invite.

Oddly, Edmonton will have 5 netminders in camp instead of the more easily manageable 4. Fans will be excited to catch a glimpse of the two newest acquisitions in the Finnish duo of Samu Perhonen and Frans Tuohimaa. 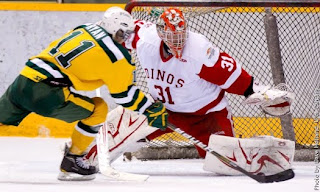 Also getting a look is a former WHL netminder who has been plying his trade in the Canadian University circuit for the past three seasons. Dustin Butler played parts of five seasons in the Western Hockey League with three different teams. He began his junior career in Portland but was dealt to Kamloops after his second full campaign. From one year with the Blazers he ended up with Prince Albert and it was as a Raider that he ended the WHL stage of his career. Only once, in that finally year in P.A., did Butler end a year with a better than .900 save percentage (.905) and his goals against averages were forgettable.

Butler has been with the University of Calgary Dinos since the 2008-09 season. I cannot comment on his performances there as i have not seen him play but both Corey Graham and Dustin Nielson from TEAM 1260 will have since they were calling games for the UofA Golden Bears. He did finish this past season with a .926 SV% and 2.12 GAA though. (Photo: Dave Holland / University of Calgary)

There will be 4 familiar faces on the backend, guys who were at the development camp last year (Bigos, Marincin, Davidson and Blain) but a score of new blood too. Colten Teubert will make his Edmonton debut after being acquired by the organization at the NHL trade deadline. Free agent signinee Taylor Fedun, the Princeton captain and hovercraft engineer, is also slated to appear. 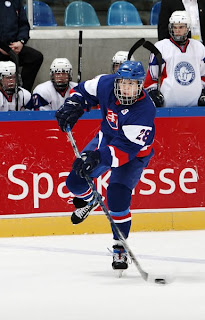 Three of the four defencemen just drafted will show up but Oscar Klefbom is not one of them. However, Slovaks Martin Marincin and Martin Gernat, the latter just taken by the Edmonton Oil Kings in the CHL Import Draft, will both suit up. So will North Dakota Sioux blueliner Dillon Simpson and Vancouver Giants rearguard David Musil, both ready to show their Oiler genetics. (Gernat Photo: Francois Laplante / IIHF Images)

The lone free agent invite is the most hated guy among WHL play-by-play men: Wes Vannieuwenhuizen. It looks worse than it is though... (Van-new-en-how-zen). Obviously the Oilers got a good look at him while scouting Musil as the two are teammates in Vancouver. He's a big bruiser who is allergic to offensive production; just 8 points all year in the WHL and all of them assists. He did pick up 157 PIMs though, just shy of top-10 in the WHL. He's 6'3 and 205 lbs and was a 6th round pick by the Giants in the 2007 WHL Bantam Draft.

Fans will get their first looks at Tanner House and Hunter Tremblay, both guys signed by Edmonton after the scholastic season ended. House was a senior at Maine while Tremblay skated for the University of New Brunswick. 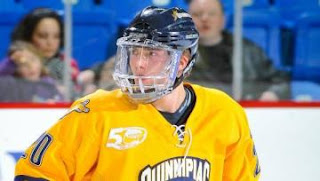 Four free agent invitees will be on display including Connor Jones, the twin brother of Kellen Jones who was a 7th round pick in 2010. The twins play at Quinnipiac in the ECAC Conference of NCAA hockey and had decent freshman campaigns with the Bobcats (Connor 24 and Kellen 22 points in 38 games).

Brett Ferguson was a great overage player for Red Deer this past year scoring 23 goals and 61 points but he was the veteran, two-way player that acted as the spark plug on many nights. When the Oil Kings did an admirable of containing the Rebels top line featuring Ryan Nugent-Hopkins, it was Ferguson and his running mates that picked up the slack. This is an interesting player to watch for.

Another University of New Brunswick alum is in camp in Kyle Bailey, a native of Ponoka Alberta who 4 seasons in the WHL, almost all of them in Portland. The 6'2, 200 lb center three straight 100-PIM seasons in the 'Dub including a 145 minute year with the Winterhawks in 2005-06. 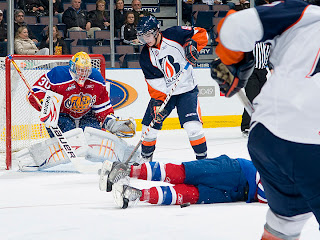 Lastly, Colin Smith, the smallish skilled center who was passed over in the 2011 NHLD Draft. The local product had 50 points with the Blazers this past season and was ranked 96th by NHL Central Scouting. He made my list of guys who deserve a look at a pro camp too. He is good friends with guys like Travis Ewanyk and Dillon Simpson as well as a number of Oil Kings. (Photo: Andy Devlin / Edmonton Oil Kings)

Speaking of the Oil Kings, not only are the four players who were drafted headed to summer camps but so are a couple of older forwards too. Ewanyk (EDM), Laurent Brossoit (CGY), Keegan Lowe (CAR) and Michael St. Croix (NYR) were chosen in Minnesota. Joining St. Croix in the Big Apple right now are speedster T.J. Foster and veteran Jordan Hickmott.

Not appearing at camp: Oscar Klefbom, Mark Arcobello, Toni Rajala, Ryan Martindale, Troy Hesketh and Robby Dee. Dee, a senior at Maine who is coming of a career year of 35 points in 36 games, will become an unrestricted free agent on August 15th if not signed by the Oilers. This is the third consecutive summer that he has not received an invite to prospect camp and at this time, there are no serious signs that a contract offer is coming his way. He was a 3rd round pick, 86th overall, by Edmonton in 2005.
Posted by Guy Flaming @ 1:01 AM

What about Martindale? Where is the love for him? I'd expect that he should be attending as well.

I read somewhere (might have been Dan Tencer) that his tonsils were acting up.

Should we be worried about Hesketh too? Is he planning on playing this year? Last I heard about him he lost his scholarship?

My bad, I missed noticing Martindale's name missing from the list.

I haven't heard why.