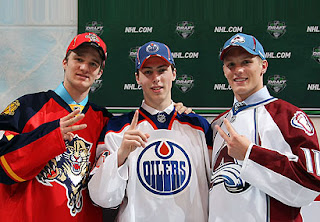 Some trades, lots of speculation, surprises and a lot of smiles. That's how one could describe day 1 of the 2011 NHL Entry Draft and I know I found it an entertaining and intriguing edition as it unfolded. Here's some thoughts I have on what transpired.


Ryan Nugent-Hopkins went first overall and media guys in Edmonton, myself included, sighed in relief after months of speculation and predictions finally came to fruition. The ongoing Ryan Smyth deal with Los Angeles, (is it done yet?), didn't overshadow the pick although it was talked about often. I hope it gets done but wake me when it's official.

I was pleased with picks 2-4 because they matched my mock and made me look smart. That ended abruptly when The New York Islanders took Ryan Strome in stead of Dougie Hamilton. I'm not going to say that's a bad pick because Strome is a terrific talent, but I was surprised the Isles didn't take a d-man.

Some were surprised and called it a reach when Ottawa chose Mike Zibanejad 6th overall but I had him going 7th so I'm not in that camp. It did mean that Hamilton and Sean Couturier were dropping though and I didn't predict that happening at all.

The first really big surprise, to me and I think for most, was Winnipeg's selection of Mark Scheifele at #7. The Barrie Colt forward joins former teammate Alex Burmistrov in the organization and his junior head coach, Dale Hawerchuk, was a legend in that city. However, that one took me by surprise for sure.

Couturier and Hamilton were quickly, and happily, snapped up by Philadelphia and Boston and then Minnesota ended the top 10 with a bit of a surprise taking relatively unknown Jonas Brodin. Not that Brodin was a complete mystery but certainly he wasn't a guy getting as much hype and publicity as guys still available at that spot. That's not to suggest it was a mistake, just that it wasn't expected.

I liked Colorado's choice at #11 in Duncan Siemens, admittedly because it was another check mark for my mock. While some were suggesting that Ryan Murphy should have been the guy, I would argue that Colorado already has that player in their system and he's named Tyson Barrie.

Murphy went to Carolina next and I would suggest that was a player they didn't honestly expect to still be available.

I like what Calgary did at #13. Sven Bartschi adds a ton of skill and offence and while I predicted Mark McNeill, pleased to be wrong in this case because I'm a fan of the Swiss dynamo and think it's the type of prospect the Flames needed to add.

I suggested J.T. Miller was one of my personal favorites as a guy I thought might get taken earlier than predicted and was happy to see him go to the Rangers at 15. Suprised that Nathan Beaulieu dropped as far as he did, to Montreal at #17, and remember that Dean was taking some flak online for his mock that had him at 21. I guess some people owe him a bit of an apology now.

Chicago plucked Mark McNeil at 18 and I know some felt that the Prince Albert center was a player of interest for Edmonton at 19. That is not my impression though as I don't think think the scouting staff was as high on him as some in the local media and even in management may have been.

Edmonton's choice of Oscar Klefbom at 19 is probably a very good one but I'll admit to hoping they'd take Joe Morrow from Portland. Both are offensive guys, Klefbom is a bit bigger but I am more familiar with the WHL kid so it was a personal preference. I'm sure they know better and when Klefbom's contract in Sweden ends two seasons from now, I'm sure he'll come over an be a good player.

I liked Ottawa's choice of Stefan Noesen at 21, he was on my sleeper list too, but I didn't expect to see him go inside the first round. I had him 30 on my list but thought that was lofty expectations.

I predicted that Tyler Biggs would go to Toronto with their first pick and he did... although 3 picks earlier after the Leafs swung a deal with Anaheim. A Burke style of player and the fact that he's going to Miami is just a nice sidebar.

Morrow went to Pittsburgh at 23 and I think they make out like bandits with that one. The Senators had a terrific day and took Matt Puempel at 24, I had them grabbing him at 21 in my mock.

The mock took a few shots to the junk to close out the round though as Stu Percy, Vlad Namestnikov, Phil Danault and Rickard Rackell went in spots 25-30.

Overall the mock was OK. 6 players went to the team I predicted in the spot I predicted.. 2 others went to the right team but in spots they traded to (Biggs to Tor and Puempel to OTT). Overall, 25 of the 30 players I suggested would go in the first round did. The 5 names still to be called are: Brandon Saad, Boone Jenner, Brett Ritchie, Rocco Grimaldi and Scott Mayfield and I won't be surprised to see them all go between 31-40.