Head To Head: Mayfield Vs. Oleksiak 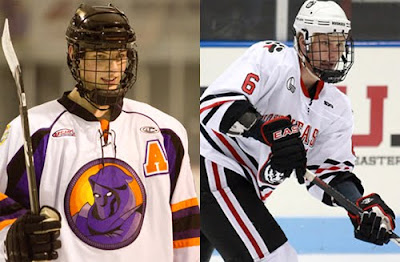 Oleksiak - "He has a bigger body and more of a presence. He's starting to develop and has a better hockey sense."

Oleksiak - "He's come a long way, skates great, is strong and it's tough to overlook his reach"

Oleksiak - "He has the size, he's physical and skates well. I like his first pass and he has some offence. He's going to be a good NHLer."

Oleksiak - "By a landslide for me because of his all around hockey sense and toughness. I think it's going to be a very interesting case where he goes in the draft. He’s got a brother that is 6’9 so he could still get even bigger."

Mayfield - "I think Mayfield is going to prove to be a draft steal if he goes late teens or early 20’s. I think he’s much better than his stats show. He’s really smart offensively and makes great reads. He plays tough, he has size. There’s no weakness except Youngstown wore him out by playing the crap out of him... He played more than 30 minutes because they were such a gong show. He’s pretty well rounded. He’s not going to be a power play stud but he can play on the power play in the NHL."

Oleksiak - "One guys is 6’7 and 240 pounds, the other guy is a skater so really different players. Who would I take? I take 6-foot-7. I think his feet are a lot better than people give him credit for, he can influence very quickly with a big long stick. He’s not a hitter but when he gets on to you, you can’t do anything... He’s like an octopus; he ties you up and takes away your ice and your space. His agility is not bad at all and he tested really well too. Mayfield is a better defined player because he’s a much better skater and he has more agility."

Oleksiak - "I would take Oleksiak based on his development curve over the last couple of years. Everyone talks about his size but before you’d see this big guy and wonder why he’s on the ice because he couldn’t play. Now you want him on the ice again as soon as possible and he can play in any situation. His skating has come a long way and his overall skill set has just come so far. In two years he’s gone from bad to more than adequate in every category and then you factor in that he’s so big and you have to take him."

Oleksiak - "He's a better skater and I think he has more offensive potential as well."
Posted by Dean Millard @ 12:00 PM