Head to Head: Ritchie Vs. Ambroz 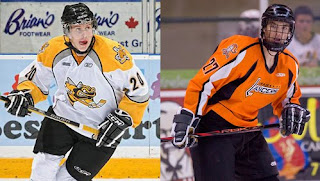 Ritchie - "That’s a pretty tough choice but I’d take Ritchie because I think he’ll figure out the way he has to play, what he needs to do to have success and I’m not sure that Ambroz will. Ambroz is a bit of a tweener for me, I don’t know if he’ll ever figure it out."

Ritchie - "He’s the more refined package. Ritchie is a much better skater, that’s not even close, but I don’t think playing in the tough areas comes natural to him. I think that's the one area where Ambroz is definitely better.

Ritchie - "The biggest reasons I take Ritchie is that he’s more prepared to play against men, he's more competitive on a consistent basis and he's stronger on skates."

Ritchie - "He played really well at U18 in April. He works hard and has some skill. Ambroz is just not a good enough skater for me."

Ritchie - "Ritchie has more upside and raw potential. I think his game will be better next year. Ambroz hasn’t gotten better; he's always been big body, but at the next level he might not make it because of his skating."

Ritchie - "I definitely take Ritchie. Ambroz just hasn’t developed very well in the last couple of years. Ritchie overcame mono and I like the guys who can battle through adversity like that. He had a good U18, not great but good, and I think he has a pro-caliber shot."

Ritchie - "Ritchie is a stud, he’s built like a brick outhouse. I saw Ambroz at the WJAC and he was good... but did he blow me away? Not really. He’s 6’2, 211 lbs and he really has to work on his skating. He needs to go on a diet, lose some weight and work on his skating."

Ritchie - "Wow... you set this up pretty tough. I would take Ritchie and the biggest reason is their feet, he’s the better skater. I think Ambroz plays with more grit in the hard areas, along the boards and in traffic. I think Ambroz is the better and more complete player today but moving forward it will be interesting to see."

Ritchie - "Absolutely Ritchie. He might be one of the most under-the-radar guys in the entire draft. He’s a monster along the walls, he’s got a hard shot that he can just release coming off the wall, he’s really smart and can size up the opposition defence and pick out which guys he can beat or which guys he can physically go after. He’s a friggin' monster, he might have been the biggest kid off the ice at the combine."
Posted by Guy Flaming @ 6:00 AM

How are all the comments saying that they would take Ritchie but overall it's 8-2 in favor of Ambroz?

I also like Ritchie much more. One of my favorite players of this draft.

This is a great series, guys. Keep it coming!

8 of the 10 said Ambroz has a more overall, all-around, balanced game, not that they wod take him... See the quotes for who the scouts said they would pick.