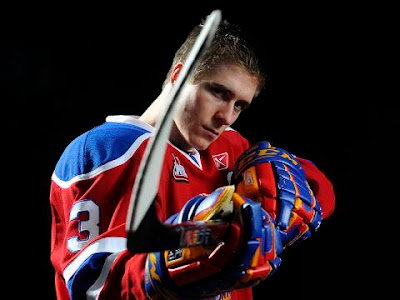 It's a big day for the marquee member of the Edmonton Oil Kings as the Buffalo Sabres have announced the signing of 2010 draftee Mark Pysyk to a 3-year entry level contract. Pysyk was selected 23rd overall in last June's draft and responded with a career year in the WHL with Edmonton. (Detail from CapGeek.com)

Pysyk was named captain of the Oil Kings at the start of the 2010-11 campaign and grew well into that role. The Sherwood Park native finished the season with 40 points in 63 games. He was invited to take part in the Canada's December camp for the 2011 World Junior Championship and by all accounts, was one of the last players released from the team.

The 19-year-old defenceman is expected to be back with the Oil Kings in 2011-12 where he'll be relied upon for his leadership and experience.

Pysyk was a Guest Blogger for us during the 2009-10 season leading up to the 2010 NHL Entry Draft so we'd like to extend a personal congratulations to him.
Posted by Guy Flaming @ 3:58 AM