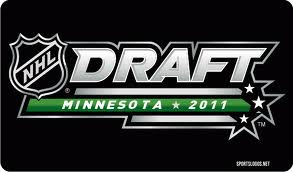 Tonight we went even more in depth with our draft coverage, which is tough to do as we focus on the draft and hockey prospects year round. We welcomed into the studio for the full 2 hours, ISS head scout Ross MacLean and he gave us and our listeners excellent analysis from bluechippers to sleepers.

For the first 2 segments we discussed forwards. Who's the most NHL ready? Who are the late round power forwards? Who's the biggest wild card in round one? Why have some Europeans snuck up on the draft and are now considered top ten picks? All those answers and more were provided.

From there it was time to discuss Dmen. What is the ceiling for Adam Larsson offensively? Can Dougie Hamilton be even better then Tyler Myers? How much has Jamie Oleksiak improved over the past few years? Who is Oscar Klefbom? We also went beyond the first round with guys like Dillon Simpson and a rather unknown Russian with tons of offensive ability.

We also spent one segment on goaltenders. How far apart are John and Chris Gibson? Where do Jordan Binnington and Laurent Brossoit fit in the mix? There might be more talented goaltenders from Europe then people think and some of them could take the draft by storm, and there could also be a goaltender previously passed over that will hear his name called fairly early.

Our final segment was wide open. From Junior A players to overaged kids to why RNH is the top prospect when he likely won't play next year. All questions from callers that Ross answered. He was a great source of information and we thank him for making the trip north for us.

If you missed some or all of it and want to check it out, simply click here. Make sure you tune in this Saturday from 10-noon mst when Guy recaps the first round and covers off rounds 2-7. I will be jetting off to Minny on Wednesday to cover the draft for Global Television...should be fun.
Posted by Dean Millard @ 11:10 PM