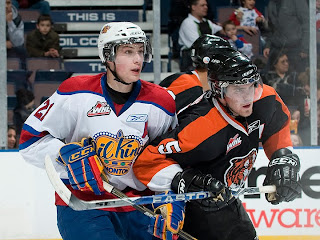 Wrapping up his guest blogging series with us today is Travis Ewanyk, forward of the Edmonton Oil Kings. The product of St.Albert, AB wrote Part I back in October and followed that up with Part 2 in December. Part 3 came out in early March. Chapter 4, in early May, covered the weeks through the playoffs and the World U18s.

Over the last month Ewanyk has been preparing for the NHL Draft and the NHL combine in Toronto.


After a quick turn around from the world U18’s I once again found myself prepping for another big event. This one however was truly unique in itself, and something I hadn’t and probably never will experience again. Going in I realized the importance of not only the meetings but the physical testing as well, and spent a great amount of time in the gym in the short time I had after finishing up in Germany. Alongside teammates Keegan Lowe and Stephane Legault, Simon Bennet at Body By Bennet had me well prepared.

My nerves were able to settle while in my hotel room as I was rooming with none other than my fellow Oil King teammate Mike St. Croix. He, as well as Laurent Brossoit, represented our team there and I know both of them had not only great meetings but excelled in the fitness testing as well. 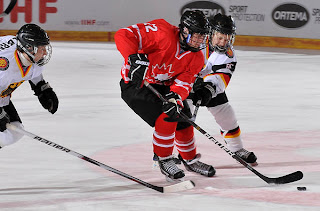 My room seemed to be the hangout for the western hockey league boys there, there was a lot of talent sitting in our room watching the NHL and NBA playoffs with guys like Hopkins, McNeill, Scarlett, Lowry and a few others all crammed in. Safe to say it proves what happens on the ice stays there, and we all get along great. It was also nice to see a bunch of my teammates off of my U18 team, it seemed to almost be a reunion with the number of guys there.

My meetings were packed into two days, and all together it was an interview process you couldn’t find with any other job. Up and down the halls, rushing for the elevators, resorting to the stairs at times, players were making their way all over for their meetings all trying to prevent the worst case scenario of being late. The NHL had it all planned out extremely well though and I for one know I made sure I was nice and early in case a full elevator delayed my timing.

Everyone always asks about the strange questions you hear, and personally I didn’t come across too many. One of the more 'out there' questions that I did receive was when I was sitting across from a man who wouldn’t look small beside Chara, one of the other staff in the room asked me with a straight face if I would fight him. I hope I sounded confident with my answer that I would if I had to, as in my mind I was hoping that chance would never come.. Another team threw me off a little bit when they asked if I stole my suit, little did I know Reece Scarlett was in there before me and they talked about how I billeted with his parents in Edmonton and stayed in his room with access to his closet.. as he was in Swift Current. The interview carried on after I denied that I stole it and must have had quite the puzzled look on my face. Only after when I told Scarles about it did he let me know the truth behind the question. 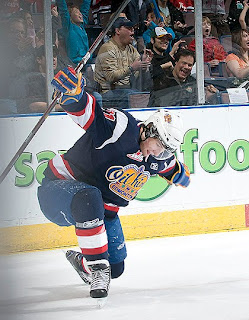 The other part aside from the interview process was the physical testing. This included the dreaded “bikes” and a barrage of other tests. I was in the final group of the first day so I had the luxury of hearing all the horror stories of the guys before me.. Anyways I tossed on my skin tight testing shirt and tracksuit, all stamped with your testing number and headed off in a big charter bus to the testing. A joke was made that we were almost convicts on our way to a not very pretty place. A big part of the testing was the medicals before hand, every bone and muscle in your body was checked out by three different doctors, and your heart examined for over 20 minutes. Finally after finishing the medicals it was off to the real deal.

The first thing they had you do was take off your shirt, and in front of the entire crowd of NHL team personnel you had your body fat testing. Just a tad bit intimidating, but it made the long hours in the gym pay off for sure. Soon I was making my way through the gauntlet of tests. With minimal rest between the stations it was definitely a battle. I ended up doing fairly well in the jumping stations and the strength stations of bench, pull, and push in the results they calculated per body weight. 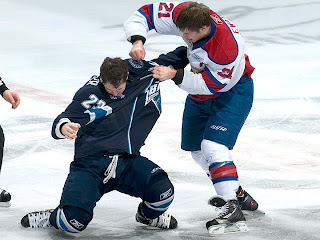 Finally were the bikes, and they definitely lived up to their expectations. I gave it everything I had and was grateful I minimized what I ate before as it cut down my time behind the curtains over the designated garbage cans.. Before I knew it however it was all done, and just like that my combine came to a close. It was a hectic few days of pure mental and physical exertion but was a great experience I will never forget.

It is now a waiting game until the NHL draft, and I hope the best for all my teammates with the Oil Kings and from the U18s.

I am grateful for the experience of being able to blog this year, and I hope I provided a few laughs and some insight into the life of a WHL player in his draft year. I’d like to thank everyone who read my blogs this year and I hope to see all the local readers out at our games this upcoming year as I for one am extremely excited for our teams potential.

Travis Ewanyk finished the season with 16 goals and 27 points through 72 regular season games with the Oil Kings. He's also racked up 126 PIMs along the way. He is listed at 6'.05 and 178lbs and is slotted 66th in North America by NHL Central Scouting in their final rankings of the eligible players for the 2011 NHL Draft.
Posted by Guy Flaming @ 4:30 PM

Nice job by this young man both on the ice and on this blog.
Good luck!
GS