There's just one week left before the 2011 NHL Entry draft will be in the books so you know that our already stacked draft coverage is going to be taken to another level. We turned it up to 10 (saving the Spinal Tap 11 for Tuesday) by bringing in the probable #1 overall pick, a terrific analyst of goaltenders, a Hall of Fame writer from Edmonton, our regular NHL Insider and we debated a number of other topics as well.


If you're the Edmonton Oilers, would you consider trading the #19, #31 and a roster player like Sam Gagner to get into the top 10? How many of this year's crop might step right into the NHL next year? It was stuff like that which Dean and I batted around as we opened the show this morning. We'd like to hear what you think. 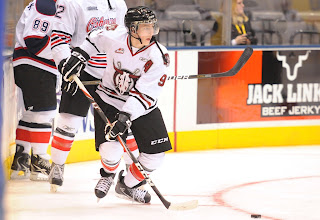 We've spoken several times to Ryan Nugent-Hopkins this year after games in Edmonton or Red Deer but today was his first official appearance on TPS during his draft season. HIs first go around with us was actually more than a year ago, April 27, 2010, when we were discussing his nomination as WHL Rookie of the Year. Today we made a point of asking him some questions that he and the listener probably haven't heard him asked over the last few weeks like how his relationship with his separated parents has contributed to his personal development, will he 'pull a Paajarvi' and drop one of the hyphenated last names and whether he thinks hockey IQ and vision can be taught or if it's a natural talent.

Dean had a conversation with Jim Matheson of the Edmonton Journal, a Hall of Famer who has covered the Oilers for generations. What does Matty think the Oilers intend to do next Friday? Is he expecting an attempt to move up from #19 and if so... for who? What roster players might be in play? An informative interview for sure.

Daren Millard joined us at the start of hour 2 and began by recounting his experience during the Vancouver riot after game 7. We also discussed Brad Marchand's impact in series and the fact that the depth of both the Bruins and the Canucks could see both teams being contenders for the next few years. We moved on to the recent coaching moves by Dallas and Minnesota and if Craig MacTavish might be in play for the Winnipeg franchise if it doesn't already belong to Claude Noel. 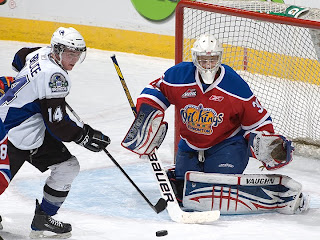 Segment 5 saw us talking with Justin Goldman of TheGoalieGuild.com who does a fantastic job in breaking down the masked men. We got his take on several of the top ranked goalies including Christopher Gibson, Laurent Brossoit, Samu Perhonen and John Gibson including a comparison of the latter with Jack Campbell (DAL) from 2010.

We ended the show by detailing our current series running here at Coming Down The Pipe, the head-to-head comparisons.

If you missed any segments of today's show and want to get up to speed or perhaps you want to hear them again... you can do that by hitting the archive HERE.

Coming up on Tuesday will be our Annual 2-hour Draft Preview. Joining us in studio for the full two hours will be the head scout from ISS, Ross MacLean, and we'll open it up for your phone calls and emails so start filling out inbox today: pipeup@theteam1260.com

We'll have another in-studio guest next Saturday as Rick Jackson from NHL Central Scouting will join me and give his thoughts as rounds 2-7 unfold. Dean will be in Minnesota covering the draft for Global TV and has some excellent stuff in store for that so make sure you're watching for it.
Posted by Guy Flaming @ 4:00 PM