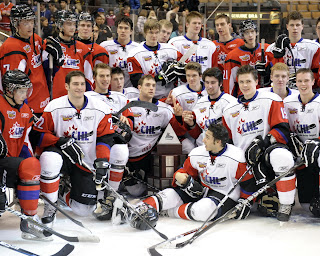 February and March mark the final drive through the CHL regular season and into the playoffs as well as the NCAA conference playoffs plus the start of the NCAA national tournament. Obviously it's an exciting time of year as teams gear up for crunch time while others seem to hit a wall and fade down the stretch.

We spoke with a number of players, scouts, coaches and media members with insight on the draft class of 2011 during that time. Here's a recap of February and March... 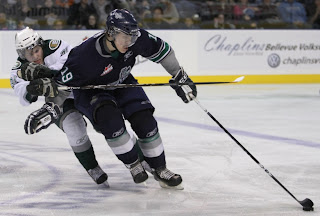 Colin Jacobs - The Texan power forward of the Seattle Thunderbirds was candid in his appraisal of himself. He also offered up a scouting report of his fellow draft eligible teammates.

Destry Straight - The top ranked Tier I player in Canada at the mid-point of the season, the BCHL forward is headed to the Boston College Eagles in 2012 and told us why that is the right program for him and how he felt about the snubbing from the 2010 WJAC in Pentiction by Canada West.

Sam Cosentino - The Sportsnet analyst gave his opinion on David Musil after calling a game on the West Coast between the Giants and the Prince George Cougars.

Jon Keen - The voice of the Kamloops Blazers joined us from Whitehorse and commented on Colin Smith and Dylan Willick during Hockey Day in Canada.

Dan Sallows - The hardworking, independent scout checked in to give us his thoughts on 2011.

Dougie Hamilton - The CHL Scholastic Player of the Year took us to school and told us about his season in Niagara. He also gave us a nice rundown on teammate and fellow top-10 ranked Ryan Strome. 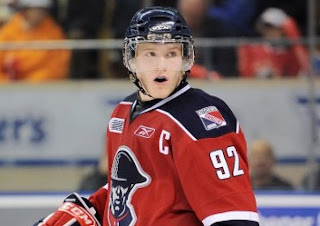 Mike Farwell - The analyst for the Kitchener Rangers and his thoughts on Gabriel Landeskog and others.

Jamie Oleksiak - Northeastern's massive nuclear deterrent on the blueline talked about his season, the draft and more.

Gabriel Landeskog - From Sweden to the CHL, Landeskog covered it all with us including his injury prior to and during the WJC. Oh, and exactly how to pronounce his name correctly.

Nicklas Jensen - The Canadian/Danish forward of the Oshawa Generals on his year plus scouting reports on teammates Lucas Lessio and Boone Jenner. 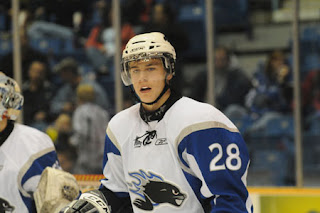 Nathan Beaulieu - Back to the QMJHL and Saint John to speak with their star defenceman about the season, the draft and his teammates too.

Kevin Prendergast - Building Canada's U18 team out of available players from the Class of 2011, Hockey Canada's head scout was a wealth of opinion and information.

Dillon Simpson - 17-year-old freshman defenceman of the North Dakota Fighting Sioux in coversation as the NCAA regular season was wrapping up.

Marcel Noebels - The German import of the Seattle Thunderbirds who came to the CHL after being passed over in the 2010 draft.

Kirk Luedeke - The Beantown area bird dog runs a terrific porspect blog and joined us to talk about the key NCAA guys around Boston to watch for at the draft. (Oleksiak, Nieto and Clendening).

Jonathan Huberdeau - Saint John's top prospect in conversation with us at the outset of the QMJHL playoffs. 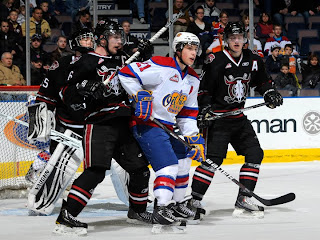 Cam Moon - Voice of the Rebels talked to us about the eventual WHL series between Red Deer and the Edmonton Oil Kings which featured a number of 2011 eligible players.

Ryan Strome - Middle man of the Niagara IceDogs dishes on Dougie Hamilton but focuses on his year and making the hilight reel on Coach's Corner.

Keegan Lowe - The Oil Kings blueliner during the series against the Red Deer Rebels.

John Gibson - The top ranked goaltender in the class of 2011 spoke about playing for the US-NTDP and deciding between the University of Michigan and the Kitchener Rangers.

Russ Farwell - Owner/GM of the Seattle Thunderbirds on various topics including his 2011 eligible players.

April and May summaries still to come and of course you can follow along with June as it unfolds live every Tuesday evening and Saturday morning.
Posted by Guy Flaming @ 6:00 PM