As we are just over a week away from the NHL draft we are putting our coverage into overdrive and bringing you more names you'll hear on Friday and Saturday. We've already covered all the big names, but how about some sleepers? That was our goal Tuesday night to introduce you to some guys who very well could jump alot in round one or beyond.


First up Guy and I threw around some draft day trade scenarios, including one for the Oilers. Also Is RNH a lock to go first overall? and we recapped our top 30 rankings and previewed our upcoming head to head series that will appear on this blog shortly. We also chatted about the unfortunate news with Denver Pioneer goaltender Sam Brittain who will be out for months after discovering an injury at Hockey Canada's goalie camp was more severe then first thought. 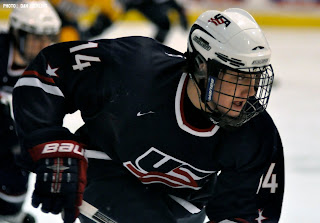 Our first guest was 'elite sniper' as some scouts have called him Reid Boucher from the US National Development team. He played on a line with Rocco Grimaldi and JT Miller, 2 guys who are getting first round consideration, but he's ranked lower then them. Boucher has played in their shadow most of the season but his 8 goals, including the game winner vs. Russia in the Gold Medal Game, likely bumped him up for some scouts. He's small but stocky and will spend another year in the USHL before heading off to Michigan State in 2013, and the fact that the Spartans have a new head coach hasn't swayed his enthusiasm for playing for his hometown team at all.

Guest #2 was big offensive defenceman Ryan Sproul of the Soo Greyhounds. Pretty much all the scouts we talked to think Sproul is the sleeper of the draft and they all hope he's there in round 2 when they pick. Sproul told us about making the jump from AAA midget last year to the OHL this year and how he got through a 17 game point drought that started his junior career. He finished with 33 points so he obviously heated up down the stretch. Sproul comes from a big family and expects to hit the 6.05 and beyond mark, after jumping from 6.0 to 6.04 in the last year. He has an offensive flavour to his game but is really working on not neglecting his own end. Sproul who is from Mississauga had a chance to take in the Memorial Cup this year and it has really stoked his fire to lead a young Soo team into that territory in the future.

Neate Sager kicked off hour #2 for us and the Buzzing the Net writer was great as usual. We chatted about the recent conversations he's had with prospects from Rocco Grimaldi to Zack Yuen of the Tri City Americans. An emailer wondered if the crack down on hitting in the NHL would change teams draft strategy? Also what's up with Montreal of the QMJHL and will Majors head coach Dave Cameron be joining Paul MacLean and his moustache in Ottawa with the Senators? 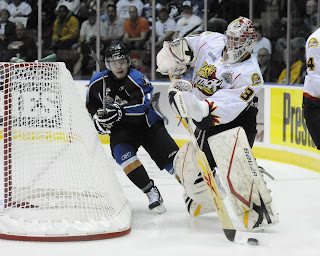 Jordan Binnington was the funniest guest of the night and his honesty was refreshing. We of course asked him about not playing in the Memorial Cup tie breaker game after standing on his head the whole tournament and he took the high road and didn't throw his coach or anyone from Owen Sound under the bus. He was recently at Hockey Canada's goalie camp and discussed how Ron Tugnutt helped him out. He also told us how earlier in the season he was to consumed with ranking and scouts and it affected his game. Obviously he got things under control as he was instrumental in getting Owen Sound to the Memorial Cup. Jordan told us about his NHL combine experience with some very funny stories about the testing and one team interview in particular...a must listen to interview. 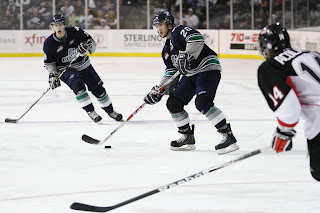 Finally we wrapped things up with Luke Lockhart of the Seattle Thunderbirds. He's not tall but he's stocky and powerful. He did pretty much everything for the T-birds this year from PK to PP and wore the rotating Captain's C during the year. He's a shot blocker and isn't afraid to stand in front of the net and take punishment from the likes of Jared Cowen whom he told us was the toughest blueliner to deal with in front of the net. Luke also chatted about the combine experience and what it was like for him.

All in all it was a very fun and entertaining show, and we only have 2 more shows before the draft. Tuesday the 21st will be our 2 hour draft preview show, which we'll get you primed for the draft like no one else can. As for tonight's show, click here to hear it again or for the first time.
Posted by Dean Millard @ 10:44 PM