Head To Head: Miller Vs. McNeill 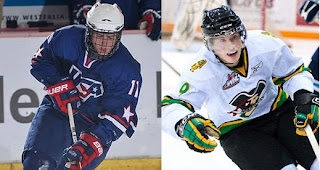 Miller - "Grit. That’s not to say that the other guy doesn’t have grit but Miller just has more of it; he’s dirtier. They’re really close, we’re splitting hairs to pick between those two guys."

McNeill - "He’s worked so hard in the off-season over the past couple of years and that means great character; he will make himself into a better player every day."

McNeill - "Strong, good skater with offensive skill. He had 32 goals and he's a good play maker. He's also a leader, he just needs to be more consistent."

Miller - "Miller has the intangibles; he can play tougher, he's a heavyweight, he's very physical and can be dirty. You always have to be aware of him."

McNeill - "He's a bigger body and has more finish. Miller is good on the cycle and in the corners and he competes. McNeill has more versatility, he could play center or wing, could be 3rd line center but 2nd line winger."

Miller - "J.T. Miller will fight to the end for me and give a more consistent effort. McNeill may have more upside but I'm not sure what I’m going to get from him."

Miller - "He reminds me a lot of Brendan Morrow and a player like that on your team makes you pretty tough to play against. That’s a great comparison though, those are two very similar players."

McNeill - "I would lean towards McNeill. Miller is faster, he has a different gear which is probably my biggest complaint about McNeill. I wish McNeill had a third gear, he has a pace but a pace isn’t explosive and you need that to get by guys. I think Miller has a little more of the physical part of the game, he can really pound guys whereas McNeill is more of an angle-guys-off type of player. McNeill ended up a minus-4 on a really bad team... which is pretty good. It’s close but based on all of that I would take Mark McNeill."

Miller - "That’s a really good comparison, you’re not making this easy! McNeill might be just a bit more of a complete package but it’s by the smallest of margins."

Miller - "That’s another good one... I take Miller for his all around game. I’ve watched him play against 24 and 25-year-old college kids and he’s done just fine physically. I know McNeill can engage that way but I think Miller is better at it, it’s more natural for him."
Posted by Guy Flaming @ 6:00 AM