Head To Head: Beaulieu Vs. Murphy 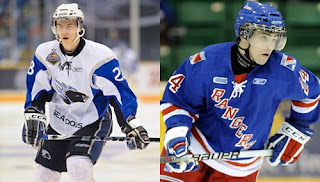 Murphy - "When you pick Murphy he's a need guy, he's special in what he does...generating offence, a gunslinger who goes full throttle."

Murphy - "He's high risk/high reward, but the reward is one that any team can use."

Murphy - "He's small but can QB your PP. His skating in today's game allows for him to play a good enough defensive game. He has a chance to be a top 2 guy while Beaulieu might be a 3-4 guy."

Murphy - "He's so highly skilled. Can skate, rush the puck, run the pp. I have concerns over Beaulieu skating backwards."

Beaulieu - "Jee-sus Chriiiiiissst... That’s a tough one! (sigh) Beaulieu. The simple fact is that the both of them are terrifically skilled, Murphy might be the most skilled defenceman in the draft, but I like what Beaulieu can bring to the game. Beaulieu can be one mean prick when he wants to be, and he likes it."

Murphy - "I’ve got Murphy ahead on my list because, he’s a very risk/reward guy. There are games where that is really dangerous but the reward is definitely there and makes it worth it. The offensive package is, for me, what probably separates them."

Murphy - "Murphy is a lot better offensively, he’s sick offensively. I’m a little worried about the concussion otherwise he’d be in my top 5. His stick is really good, he positions himself really well. He’ll be #4 on your depth chart but #1 on your power play. Beaulieu is more well rounded though; he's actually a pretty tough, competitive kid."

Beaulieu - "that’s a really tough one. Beaulieu is 6’2, a late birth date and a pretty good skater. Murphy is a pretty damn good skater too. That’s a hell of a comparison because one guy is bigger than the other and that’s about the end of it. I lean toward bigger guys if I’m looking to break a tie so... Beaulieu."

Murphy - "there aren’t a lot of players as skilled as Murphy. There is obvious risk associated with him but i think every team needs that kind of a player because he adds a different dimension to what your team is able to do."