German Attendance Record About to be Smashed 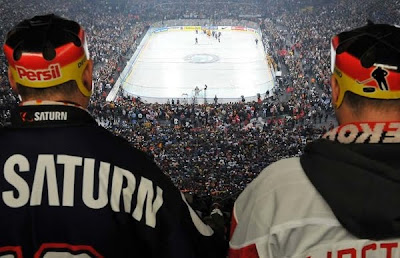 Thursday's outdoor game at Veletins Arena in Gelsenkirchen, Germany between the host nation and USA was memorable for two reasons. First, Germany won the game beating the Americans 2-1 in overtime and secondly, the 77,803 fans who packed the soccer stadium represented a record number of people to take in a hockey game.

The Germans like to party and they hooted and hollered, chanted and chortled throughout the entire contest, some may have even cared about the game. I am half kidding - I know there is a dedicated following for the sport in Germany but having been in the crowd at the Heritage Classic in 2003, I can tell you that being able to say you were there is probably as satisfying (if not more than) than actually living through that freezing experience. For now, congratulations to Germany for putting on a big show and setting the new record.

Enjoy it while you can because in 8 months your record is going to be just another footnote. Circle Dec 11th on your calendar and prepare for what is bound to be a hockey spectacle like no one has ever seen before.

The outdoor stadium hockey game is going back to its roots in December as Michigan and Michigan State renew their rivalry. The two teams staged the first outdoor game back in 2001 at East Lansing's Spartan Stadium with the game ending in a 3-3 tie. This time around the Wolverines will play the role of host and advanced ticket sales have already surpassed the 100,000 mark.

The expected final attendance figure is expected to come in around the 110,000 mark, that's more people than the 2003 Heritage Classic and 2010 Winter Classic at Fenway park combined. Easily.

"The Big House" is home to the Michigan Wolverines football team and has been since it opened back in 1927. Here's an aerial shot of the stadium. 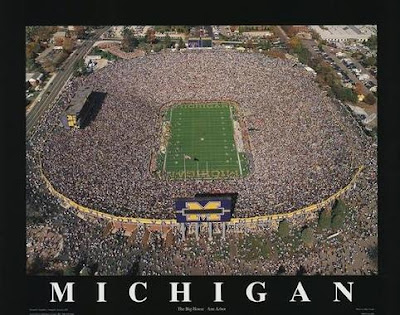 Here's a rundown of the outdoor games in the last decade with the attendance figures in brackets. I also included the final of this year's NCAA Frozen Four which was played indoors but in a football stadium.

Anyone else notice that the NCAA game at Fenway this year drew slightly more fans than the NHL version?

There are rumors that for the 2011 Winter Classic the Philadelphia Flyers and the Pittsburgh Penguins could meet at Penn State's Beaver Stadium, another facility which seats in excess of 100,000 people. As far as I know, that's complete rumor at this point but still... it makes a person ask the question: How do you top The Big Chill this December?

What I think might happen is that instead of going for record attendance numbers, organizers might resort to making the event itself the memorable part of it all. We've reported in the past that the AHL's Norfolk Admirals have at least taken initial steps needed to potentially hold an outdoor game on the deck of an aircraft carrier - the U.S.S. Eisenhower.

There was talk that the WHL and Hockey Canada considered tying a Regina game as well as a World Junior exhibition into an outdoor experience prior to the 2010 event. It obviously didn't come to fruition but might the league be looking to do something outside in the near future?

It's that type of creativity that will be needed to prevent the outdoor game from turning into a stale fad- if it hasn't already.

What other out-of-the-box ideas might be lurking out there?
Posted by Guy Flaming @ 5:25 AM

A couple of mistakes:

1. The name of the stadium in Gelsenkirchen is Veltins Arena, not Veletins. Veltins is the German brewery that purchased the naming rights for that venue.

2. It wasn't an outdoor game. Veltins Arena is a retractable-roof stadium, and the roof was closed for that game.