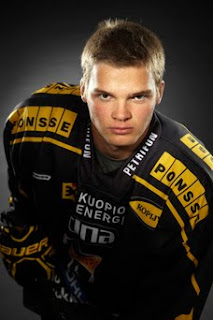 So remember how on April 26th I mentioned that the Oilers had to sign both Phil Cornet and Teemu Hartikainen by June 1st, but was then corrected by the organization that the date didn't actually affect the Finn? It sounded odd to me then but that's what the team told me.

Then on May 3rd I passed on the further details of Edmonton's explanation as to why they actually had until June 15th to sign Hartikainen.

Tuesday night on The Pipeline Show I also made mention of the information an Oilers source had given me - that a deal with Hartikainen didn't have to be reached until June 15th. Apparently, that's not correct after all.

"The correct date for Hartikainen is June 1st."

That today courtesy of the source who called me to give the latest correction. Apparently the team had been in contact with the league office for clarification and were told that June 1st is the correct date because he is an "unsigned 2008 draft choice." 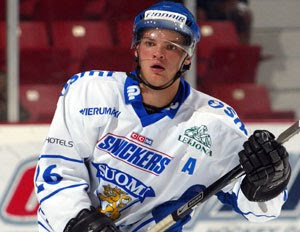 In the end it's probably not going to be a big deal, the team expects to be able to get the 6'1, 201 lbs winger under wraps before then. However, as some fans have pointed out, this is the second time in as many seasons that the team has publicly miffed on CBA information given to the media (see Gilbert Brule last summer).

Hartikainen was a 6th round pick in 2008, a choice that I'm told was spearheaded by recently fired Kevin Prendergast, who had a career year in Finland scoring 33 points in 53 games. That total was top 50 in the league and earned him a tryout with the National team in advance of the World Championships that begin this weekend.

So that's the update and hopefully things don't change again. The Copper & Blue guys have a bunch on this too and have spoken to a bunch of Euro sources that also confirm the June 1st deadline.
Posted by Guy Flaming @ 11:43 AM

Guy - given their lack of understanding with the CBA - you should take their reading with a grain of salt. Always.

you know it. Hard to believe they could not have a handle on it since it's their job.

this is the second time in as many seasons that the team has publicly miffed on CBA information given to the media (see Gilbert Brule last summer).

Grammar police here: The Oilers "muffed" CBA info. It is we fans who are "miffed". :)

I'm betting they didn't realize Khabby's contract had an inescapable cap hit either when they signed him.

LOL Bruce... miffed, muffed, whiffed, whuffed. Take your pick i guess, it all equals to embarrassing.

All I know is that if management gets stiffed one more time, they can get stuffed AFAIC.

I hate to say it, but there are many of us out in the blogging community or on the forums that know these rules (such as the one Bruce mentioned about Gilbert - I remembered discussing this on OilersNation) better than our own "CBA" expert, Rick Olczyk.... is this not a bit of a concern??

And I agree with Spoiler on Khabi.. something again that pretty much every Oil fan in the know was painfully aware of when that deal was made.

And really I DO hate to say it... but these guys in that position should know this stuff.

Racki - I'm not one to profess to know the CBA inside and out, there are a bunch of guys who can navigate that legal mumbo-jumbo way better than I and so I defer to them.

I just assumed that the team had a couple of them on their payroll.

I do know that there is one person in the organization who is quite capable in that regard but it's not his role/job description. He's explained things to me in the past though.

Guy, does the NHL have a contact the press can confirm these deadlines with? Why not go straight to the source?

vb - not sure to be honest, I have never felt the need to go that route since there is a team right here that can answer those same questions.

Maybe they can hire someone from a well-run organization like the Flyers. You know, like whoever signed Chris Pronger to that extension, thinking it wouldn't count for the 35-and-older rule.