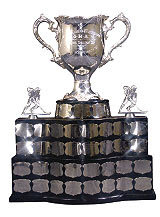 The city of Brandon is buzzing with nervous excitement as their team will play in a Memorial Cup final for the first time since 1979. Brandon will be looking for it's first title in franchise history. Windsor on the other hand is looking to go back to back and win their 7th straight Memorial Cup game after rattling off 3 straight last year to take the title.

On Friday night, Calgary's Martin Jones suffered yet another overtime heart breaker. If you remember, he was between the pipes when John Carlson beat him at the World Juniors. I asked Jones which one is a tougher loss, and obviously he has to let this one sink in before he'll know for sure. I think this one might be, as Jones was the starter the whole way, and this loss ends his season, where as after losing gold in Saskatoon he returned to Calgary to finish the season. 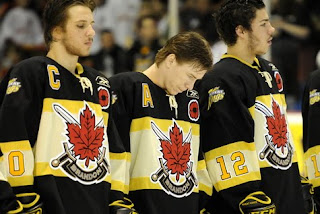 Two of Jones' opponents Friday night though were able to celebrate an overtime victory after sharing with Jones the defeat in Saskatoon. Brayden Schenn told Travis Hamonic that it was nice to be on the good side of an overtime win, and for Hamonic today will be extra special as he had to watch the gold medal game with an injured shoulder.

Of course there's Matt Calvert, who turned down a pro contract to try and win a Memorial Cup as a 20 year old in his home town. Calvert said it's been a great week with all his buddies back in town and he can't wait to hopefully celebrate with them after tonight.

On the flip side, the Spitfires are trying to repeat as champions, something that hasn't happened since Kamloops turned the trick in 1994 and 1995. Taylor Hall will likely be named MVP and he deserves it, unlike last year where many people thought Adam Henrique should have won it. 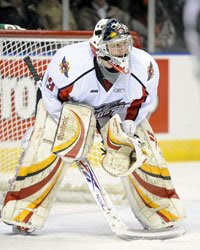 The keys tonight for me are goaltending. From what some OHL media and coaches have told me, Windsor's Phillip Grubauer might be due to struggle, like has done in the past. He's been good, but not great in the tournament so far, but he doesn't have to be. The pipeman just has to keep the Spitfires in the game and out duel Jacob De Serres at the other end. De Serres will have to stand on his head if Brandon is going to win. He let in a soft goal against Calgary and the Wheat Kings still managed to pull it out. I'm not sure he can afford any bad goals against the high powered offence of the Spitfires.

I would expect Brandon to throw the puck into the corners of Cam Fowler and Ryan Ellis all night. Yesterday an OHL coach familiar with Windsor said that's how you beat them. Dump the puck in and pound "the two softest guys on their blueline". If Brandon can forecheck like they did against Calgary they could be successful. However they will have to deal with Windsor's depth coming at them wave after wave all night long.

Win or lose, It's been a great week in the Wheat City, and for a guy who grew up in this city, I'm very excited to see Brandon in the final. I might even cheer a little inside if they win. Having said that, I like to see the best team play at their highest level and Windsor winning today will solidify them as one of the best teams in CHL history.

Enjoy the game whether you're in the stands or following along with Peter Loubardias and Sam Cosentino on Rogers Sportsnet.
Posted by Dean Millard @ 2:52 PM

"I might even cheer a little inside if they win."

And by a little he means fist pumping and high-fives all around.

I'd hate to be the guy sitting beside Dean should Brandon win... he might kiss him.

Great week with all the updates from Brandon Deano. Have a breath mint before the game just in case.

you'll laugh when you hear who is sitting beside me. One of the greatest wheat kings of all time, none other then Marty Murray. So cheering inside will be ok.

you'll laugh when you hear who is sitting beside me. One of the greatest wheat kings of all time, none other then Marty Murray. So cheering inside will be ok.