Players who were drafted in 2008 have either been signed already or will need to be in the coming weeks or else they will be dropped back into the prospect pool and available once again in the 2010 NHL Draft. The Edmonton Oilers have a pair of players that they still need to get under contract but there are different deadlines for each one.

Last week I wrote that Edmonton's exclusive rights to both Phil Cornet and Teemu Hartikainen was in jeopardy unless the team was able to get the pair to sign deals before June 1st. However, the Oilers told me that "Cornet is the only one who needs to be signed before June 1st; Hartikainen is under contract in Finland and we can't sign him until he is relieved of his contractual obligations over there." 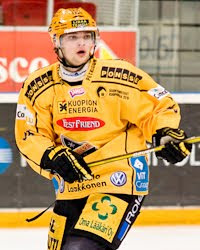 I wasn't aware of a different date other that June 1st and I don't think that I was the only one. A few readers left comments: "Um, don't the Oilers know there's a transfer agreement in place between the Finnish Ice Hockey Federation, SM-Liiga and the NHL?"... "The team REALLY needs a CBA expert in-house." and... "Olczyk and the Oilers somehow thought that Brule didn't have to clear waivers this year; This isn't a new problem."

I pressed on for more of an explanation and I can report that this is what I have been told:

"The Finnish Agreement calls for 2008 Drafted Players to be signed by their drafting club by June 15, 2010. If not signed then the players re-enter the Draft."

So according to that, it's true to say that they don't have to sign Hartikainen by June 1st like they do with Cornet, however, it doesn't mean that they'd hold his rights for long beyond that. It's not a similar case as with players in Russia.

Cornet, who ended the 2009-10 campaign with 77 points, needs to be signed by June 1st. He was originally selected in the 5th round of 2008. Hartikainen's deadline is June 15th and after a 33-point season in Finland, I'm sure that's something the club is trying to get done sooner as opposed to later. The Finnish forward was taken in the 6th round, 163rd overall.

It stands to reason that the rules are a little different for guys playing pro hockey like Hartikainen. His season just ended recently, and presumably only now is the signing window opening up. I don't imagine KalPa was too interested in signing a transfer agreement while he was still playing for them. Not sure if such things can be future dated, I would more imagine that conversations take place but nothing formal is done 'til the time comes.

I really hope they get it done, Teemu's a strong prospect, but I don't think timelines are out of whack ... at least, not yet. Good to know they've got an extra couple of weeks to work with.

Agreed, I would like to see him over here next year. I know there are scouts on staff (and one recently departed) who think he is a real steal from where they got him at the draft.