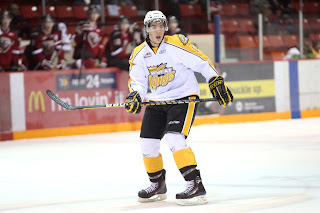 Yesterday we posted a list of 2008 draftees who would see their rights return to the NHL Draft if they were not signed to entry level contract by June 1st. You can scratch two names off that list now as the New York Islanders have reached that agreement with defenceman Travis Hamonic and Anaheim inked forward Brandon McMillan.

Hamonic had a stellar year with Moose Jaw and then Brandon but also spent time with Hockey Canada before he was hurt in the World Junior Championship. Before his injury there were people who follow and cover the WHL that felt he was having a MVP type season and was arguably the top blueliner in the league.

The Manitoba product was a 2nd round pick (53rd overall) by the Islanders in 2008 and would definitely have been reselected higher if in fact he was available in the 2010 draft. 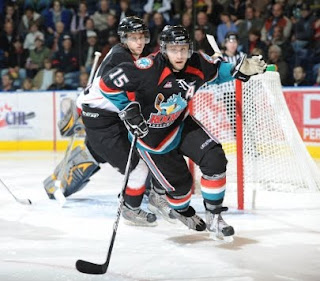 McMillan had 67 points in 55 games with the Kelowna Rockets this past year, a career high in all offensive categories. That might have more to do with the fact that he's played both forward and defence with the Rockets but spent much more time up front that on the back end this year.

The Delta, BC native has represented Canada at the World Junior Championship and back in 2008 caught scouting attention after winning the fastest skater event during the Top Prospects game skills competition.
Posted by Guy Flaming @ 1:39 PM

For men who want bigger, harder, longer-lasting erections, there's now VigRX Plus™, a fresh twist on the already popular VigRX™, but designed to further enhance men's sexual functioning with the addition of three exciting new ingredients: Damiana, Tribulus, and Bioperin. Doctor endorsed and rated #1 for results by clients of penis enlargement consumers. rated two penis pills is vimax. if you find about male enhancement this products is the best and proven to work, there products have money-back guarantee in effectiveness and result.