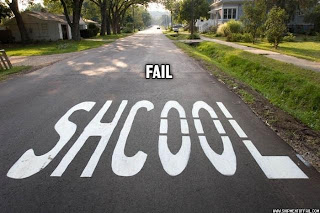 There is another "report" circulating which originates South of the 49th parallel and takes aim at the Canadian Hockey League. The "report" focuses largely on the subject of education, not simply the scholarship issues but from a variety of view points including high school, grades, homework and study time.

The "report" is so blatantly skewed towards the pro-NCAA end of the spectrum that it's embarrassing. I would think that even smart NCAA proponents like Paul Kelly would read such a release and think "Um... I'm not sure this makes 'us' look all that good."

FAIL is an apt description.

The "report" contains gems about the CHL such as "players are not required to pass academic coursework while playing", "No billet, good or bad, is going to supervise a young adult's social and educational life like a parent will", "if you don't pass in school you can still play hockey", and a personal favorite of mine "Less games (in the NCAA) means more time for school".

Suffice to say that we'll be discussing this "report" on Tuesday's show and in the next little while I'll be speaking with a number of high profile CHL and people (coaches, GMs, league reps) to get their response to all the points the "report" brings up.

Mr. Kelly will also get a chance to chime in with his thoughts because it didn't come from him, College Hockey Inc. or the NCAA. I expect they'd have some concerns with what sort of PR issues this could cause them.

Anyone who listens to the show or follows us here on the blog knows that both Dean and I are proponents of BOTH the CHL and NCAA paths to professional hockey. We get defensive of both routes when they come under fire from critics. We have no agenda and that should be clear to anyone who is familiar with The Pipeline Show and the fact that, despite being in the middle of WHL territory, we still dedicate a segment every week to NCAA coverage during the season and playoffs. 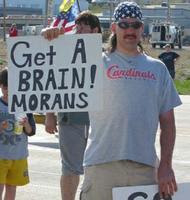 Are we blind and suggesting that the CHL doesn't have any problems? Of course not.

However, when we see propaganda being circulated which is so blatantly one-sided we have to respond. And when we do tackle this particular release you won't want to miss it.

Oh and by the way, here is where you can find the "report" courtesy Bob Turow, Director of USHL Central Scouting and Recruiting. It's dated 2007 but I have contacted the league to see if Mr. Turow is still employed by them and if this release still accuratley reflects how he and they feel about the CHL.

"Bob left to pursue other interests, but remains a resource for us. He definitely stands by what is in this file and we support this also."

Cue the responses from around the hockey world. Got an opinion? Then please share it here in our comments section!
Posted by Guy Flaming @ 8:00 PM

Devil's Advocate mode ON
(I'm torquing the comments a touch.)

Doesn't the CHL yank your university education money back if a marginal prospect signs any pro contract?

Why does the CHL yank the university education money back?

At a minimum, why shouldn't there be some sort of earnings threshold before the CHL yanks your university education money back?

Why won't the CHL let a player play for his home town team, and live at home, if he so chooses?

Why is the drafting of children by money-making businesses in Canada allowed? Why are they not at least paid the minimum wage?

Plans already in place to get Jim Donlevy from the WHL on the show to go over all the finer points. I'm not the expert but i believe...

1 & 2 & 3) If you sign NHL or AHL contract you forfit the scholarship money. Really, if you're getting paid to play professional hockey thanks to the training you received while playing in the CHL... why do they need to compensate you more after reaching your career choice successfully?

It's the guys who don't succeed that the scholarship money is there for. Quite honestly, I think CHL guys who sign ECHL contracts when their junior eligibility is up are making a mistake. The ECHL will be there for you at 25, take the CHL scholarship and play CIS, get your education and then go play minor pro if you still want to.

4) No offence meant but that's the oddest idea I have ever heard. I think the competitive balance between Vancouver and Swift Current might be a little tilted.

5) This is a worthwhile topic and one I think deserves more attention. It's pretty tough for these guys to play, practice, stay on top of their studies. Not sure if any have part time jobs or not.

I think it's quite valid to wonder why CHL or Jr. A players don't get compensated more.

I think it's clear the CHL is in a position where it can be blatantly contradictory in it's direction as a pro/amateur league, but play it off as nothing because those criticisms carry no threat to their bottom line.

Now that Junior Hockey is bigger nationally then it's ever been, thanks to TSN and the World Juniors, more kids are going to see the CHL as a "dream" than just a stepping stone on the path to the NHL - I can't see this issue being resolved anytime soon.

But it's the NCAA's policies, particularly the one about seeing the CHL as a pro league, that keeps these kids from higher education - not the CHL itself.

I know this is a general policy that affects all of the NCAA sports programs, but if they could some how find a way through the miles and miles of red tape and make it so CHL graduates can go to the NCAA at ages 18 or 19, after their fortunes as an NHL prospect have waned, I guarantee you NCAA Hockey would be stronger then it is today.

I can't quite picture how that would be anything but a win for the kids involved.

Well, maybe not so much for the kids who barely make the cut and wouldn't with a influx of CHL stars - but that's life.

Ummmm.... if you want an NCAA scholarship, you usually have to play either Jr. A, USHL or USNTDP, all of which involved being billeted away from home.

So, by recruiting the majority of players from those avenues, isn't the NCAA kind of encouraging the practice as well.

I come from Ann Arbor which is NCAA country but don't get me wrong I have been to a number of Whalers and Spits games.

I would like to say that this document is done by the USHL not the NCAA. That being said it is a pretty poor document from a statistics point of view. I was once told that numbers can tell you anything depending on who is evaluating them.

I made sure to contact the USHL and see if they still stand behind what is written here and was told that they do.

We'll get to the bottom of all the numbers and stuff, probably after the NHL draft because it will be so time consuming, but it's on the agenda for sure!

I plan on talking to Paul Kelly about it to just to get the NCAA response to this - I expect they won't be 100% behind it either.