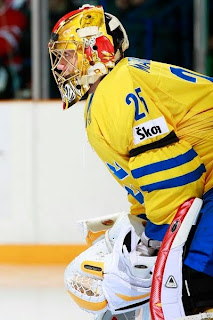 June 1st 2010 or 2011 deadline... I guess it doesn't really matter any longer as the Florida Panthers have reportedly struck a deal with top goalie prospect Jacob Markstrom.

According to a couple of different sources (here's one) the Panthers have locked up the Swedish goalie with a 3-year deal.

The Hockey News has had Markstrom pegged as the topped keeper outside the NHL in each of their last two Future Watch issues.

It's hard to believe now that Markstrom was drafted in the 2nd round in 2008, the third goalie taken that year after Chet Pickard (NSH) and Thomas McCollum (DET).

The native of Gavle, Sweden, Markstrom has started in the last two World Junior tournaments for his homeland. In each event he began incredibly strong but faded in the later stages, neither time did he earn top goalie honors despite the expectation that he would.

The Panthers still have Tomas Vokoun and Scott Clemmensen in the organization but this may mean someone gets traded or that the Cats are happy to have their star prospect start in the AHL next season.

Hello, I apologize for contacting you in this fashion, but I think you might be interested in submitting your site to my new sports directory…at thesportszone.org

I'm assuming comments are moderated so when I click submit this post won't automatically appear on site, if it does, I again apologize.