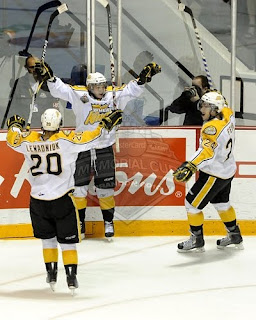 The two teams that dropped their tournament openers met on Sunday, the winner would still have a terrific chance of making it out of the round robin but the loser would have a huge hill to climb at 0-2. After an embarrassing 9-3 pounding at the hands of Windsor on Friday, Brandon wanted to prove that they belonged and did so with a 4-0 blanking of the Moncton Wildcats.

The Wildcats were effective early on and the shot totals favored them through the first half of the opening period. The momentum didn't last though and Toni Rajala (EDM) got the hosts on the board just past the midway point of the period with a nifty backhand that beat Nicola Riopel (PHI). 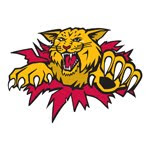 Moncton was coming off a game against Calgary that, by all accounts, they should have won. With little rest, the QMJHL champs could not afford to fall behind but they did and things only got worse in the second period.

Rajala struck for his second goal of the contest and three minutes later Brayden Schenn (LA) notched his first of the tournament which put Brandon ahead 3-0.

The Wildcats held the same lead over Calgary the day before and i assume that was the rallying cry on the bench but every time the Sportsnet camera panned Danny Flynn and his squad, all I saw was guys hanging their heads - they looked both tired and defeated. I think the loss to Calgary really devastated that team.

The third period's only goal occurred after a broken play. An odd man rush that was broken up by Moncton's defence still found it's way to former Edmonton Oil King Brent Raedeke who pounced on a loose puck and beat Riopel's outstretched pad. 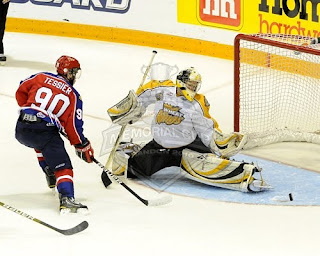 Riopel played a decent game although I think he'll admit that he was out of position on the second goal. Moncton got spirited efforts out of key players like Kelsey Tessier and Gabriel Bourque but couldn't find a way to beat Jacob De Serres in Brandon's net.

The Wheat Kings looked a billion times better in this affair than they did on Friday night. Was it because their opponent today was tired and deflated from their Saturday game? Could be. I think it was also a case of wanting to prove that just because they are the host club, that doesn't mean they can't compete.

The line of Rajala, Aaron Lewadniuk and Jay Fehr was strong all game and I thought Matt Calvert was exceptional as well.

The final shots in this one were 38-31 in favor of Brandon. The Wheat Kings next game comes on Wednesday night when they take on their WHL rivals from Calgary. Moncton will need a big win over Windsor on Tuesday to stay alive - but this is the same boat that Windsor was in at the 2009 Memorial Cup in Rimouski and they went on to win it all.